San Marino: 5 things not to miss 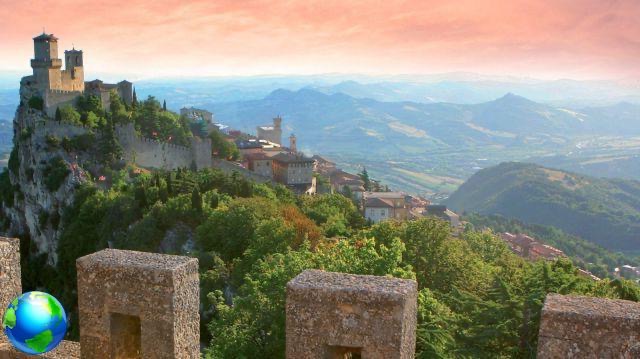 The ancient Republic of Liberty is famous for its medieval charm: in City, as the historic center is familiarly called by the inhabitants, the winding streets climb up to the three towers, symbol of San Marino in the world. The beauty of the place, a Unesco heritage, is undeniable and is undoubtedly worth a visit, going as far as the Piazza del Pianello with the elegant Palazzo Pubblico and Quarry of the Crossbowmen, location of the traditional medieval summer festival.

Yet, there are other sides of the small state that in haste it forgets to explore.

Not everyone knows that San Marino is made up of 9 castles, of which Montegiardino it is the smallest by extension. Not for this is the least beautiful, indeed. The alleys of the old town are the envy of the villages of Italy and the roses at the edge of the town gate refer to the colored flowers on the coat of arms. It is not a very touristy place, so take advantage of it to enjoy the silence and tranquility of the streets, because Città will seem like a metropolis in comparison.

Not all castles are so characteristic, some are located in industrial areas, but I would like to point out two others that deserve a stop and are located right along the road to get to the tourist center.

The first coming from Rimini is Serravalle, where you can enter the complex of the ancient castle, now used as houses, and if you are lucky enough to find it open, visit the town hall, beautifully frescoed.

Also Borgo Maggiore it is worth a stop, because as the center is considered a Unesco heritage. It is precisely here that the old market took place and the new one continues to take place weekly. Take a look at the calendar: from time to time special events take place here, which animate the squares until late at night, such as the Festa del Borgo and Chocotitano.

The San Marino train is a piece of history that all the locals really care about. The railway connecting with Rimini only arrived in the city in the XNUMXs, while previously the summit of Mount Titano was reached only on foot or on the back of a mule. Think what a revolution it must have been!

During the Second World War, however, heavy bombing interrupted communications and the numerous tunnels, which were located along the last stretch, became a refuge for the displaced. Since then, the typical white blue train, like the colors of the San Marino flag, it has become a memory, although ruins of rails and wagons remain around the Republic.

For the past couple of years, an original locomotive and compartment have been restored and put back into motion during a heartfelt inauguration at the Montale Gallery in Borgo Maggiore. Entering those artificial caves is always exciting: it is a bit like breaking a taboo.

For a suggestive photo though, I recommend you head towards Valdragone and along the way you will discover a viaduct that comes out of nowhere. Get out of the car and raise your head: above you, the white and blue train seems to be headed somewhere like in a vintage color photo. The surroundings are suggestive with the panoramic view of Mount Titano and the ancient wash houses. It is an unusual glimpse, which you cannot really miss.

The San Marino cuisine is actually very similar to that of Romagna, but the territory of the small state has large fields to cultivate and local products are really of quality. Leaving aside the Titan cakes, which are actually a souvenir for tourists (I like them a lot, though), I would like to recommend the Land Consortium of San Marino, which aims to protect all those foods (oil, bread, honey, milk, meat) made with quality procedures.

To buy them, visit the Typical Wines Consortium  recently renovated. In addition to the factory for the production and storage of bottles, a nice shop has been created with the possibility of tastings, where aperitifs, dinners and concerts are occasionally organized.

The rooms are well cared for in the simplicity of the wood and the real host is the wine, arranged on the shelves, following the various typologies: the Sangiovese certainly cannot be missing, but rising in quality, there are the red Brugneto and Tessano and the white Roncale and Caldese. Moscato di San Marino has received many awards, but my favorite is the fortified Oro dei Goti.

Some say that from the top of Mount Titano you can also see the Croatian coast on clear days. Thanks to my myopia I have never succeeded, but I can assure you that there are some points not to be missed.

To reach, the more traditional one, in addition to the highly marked Pass of the witches, just descend the Contrada degli Omerelli, where the State Library, where the original Country Gate is preserved: enter, it's free!

You walk on a street full of historic buildings until you reach the Room of Silence, a very fascinating place, because it is carved into the rock, and right in front of it is a panoramic terrace that will allow you to see the Riviera from above.

San Marino is famous for the Tax free and there are people who go to buy glasses and perfumes at discounted prices, organizing real trips. Then there is the "military" side of the market, since it is possible to sell weapons, including military crossbows, within the state. I will not give you information on these types of shops: already going up the freeway with your car, you will see several. The historic center is also full of shop windows advertising the specialties of the San Marino trade: you will be spoiled for choice.

However, there are also dealers of handcrafted and quality items: I will recommend a few. There Saponeria del Titano , in the small square of the Titano, sells natural cosmetic items, made in their laboratory. Face products, soaps of any kind, creams for men and women and home fragrances will be an excellent gift for you and your loved ones. The orders are always very available and with each purchase, they always leave several testers for the next purchases… even online.

Also in the center there is the Candle Factory, where it is at least worth entering: you will feel like you are in an enchanted world. In the semi-darkness, illuminated by soft lights, you can choose between candles of all shapes and colors.

Audio Video San Marino: 5 things not to miss
Where NOT to go for Easter: in Sweden ❯

add a comment from San Marino: 5 things not to miss