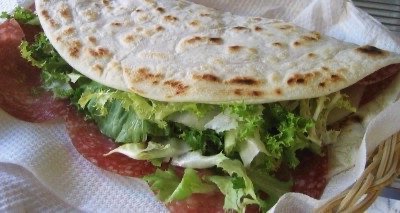 Who has never tasted a piadina or cassone from Lella?

Who has been to Rimini He knows, "Dalla lella" is one of the reference points for piada and cassoni in Rimini

La Lella (Graziella, the owner) was one of the first restaurateurs of Rimini, in 1986, to create a shop of piada and cassoni and since then it has grown by giving birth to a second and a third store in Rimini, up to bringing its own tradition a New York, thanks to his son.

The points of sale di Rimini are located in viale Rimembranze 74 / A, in via Covignano 57 and in piazzale Kennedy on the sea. All have tables and chairs to enjoy the wraps and cassoni on the spot or take away service. For those who want to bring the real Romagna piadina home after returning from a holiday, from Lella can find different packs of pre-cooked piadina.

Every year Dalla Lella is renewed and in addition to the classic dough you can find the piadina with olive oil, chilli, kamut, wholemeal, spelled and fennel! But obviously there is no lack of traditional wraps and cassoni such as the "red" (tomato and mozzarella), the scquaquerone piadina, raw and rocket (the traditional Romagna) and the "green" (with herbs).

In summer there are also the “triangoli sfiziosi”, triangles of piadina stuffed with cold ingredients such as roast beef, bresaola, turkey and porchetta and there are also special wraps such as gorgonzola and speck and the greedy ones with Nutella.
Prices are cheap, a red cassone costs 2,80 euros up to a maximum of 5-6 euros for a piadina with more fillings.


Lella's son has brought his origins up to New York.  When I left for a holiday in the "big apple" I didn't miss the opportunity to rediscover the flavors of home even on holiday from “Piadina wine and kitchen", the restaurant- piadineria Romagnolo in New York.

The prices are a bit higher than those of Dalla Lella in Rimini, as some ingredients are imported directly from Rimini.

If you have not had the opportunity to taste the Dalla Lella piadina in Rimini you can always do it at New York!

Kokoroya, the Japan you don't expect in Turin

Bologna, at the Mulino Bruciato kitchen open until 2 am

Where not to eat in Pisa: Santa Maria restaurant

Osteria ai Canottieri, where not to eat in Venice

add a comment from Piadina Dalla Lella, from Rimini to New York