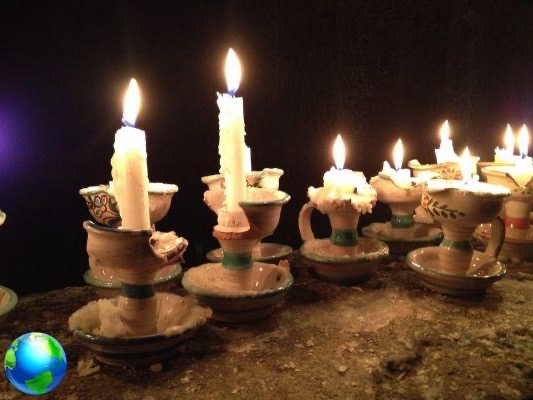 Il Naples Underground Tour if you are not too claustrophobic, it is worth trying. Before starting the story, I invite you to take the tour only with the real association of Underground Naples, the one located in Piazza San Gaetano 68, on Via dei Tribunali and no others. The road you will take is a closed road and even before entering it you will find the queue to access the tour. Don't worry, the queue goes fast also because the tours start in different languages ​​and so you will go on quite quickly.

The Underground Naples Tour was really nice and interesting for me, I tried to take notes as long as I could, our guide was really good, even if at a certain point I got anxious and in a few minutes I was missing the air below - .- I must say that the route is beautiful and even if I managed to do it all (except an optional piece), it is good to know before entering and paying the ticket that there is a part, right at the beginning of the route (which is done only on the outward journey and not also on the return because you then exit somewhere else) that for a while '"Annoyance". The width of the first section is 70 cm, you will understand that those who suffer a little from tight spaces would do better not to access also in order not to slow down the whole group then.

Having said that, Naples Underground deserves to understand the history of the city a little, from the Greeks to the Romans up to the Second World War. All of Naples has passed from below. The tour starts outside but in a moment you find yourself in 40 meters of depth. The first room you will see serves a while to introduce everything else and allows the guide time to show you the first narrow corridor, the one I was talking about above. The guide before proceeding invites you to be "honest" with yourself and the group. I did the first tunnel but I must say that I didn't feel very well right away, then I resisted until the end, but everyone has to deal with their fears :)

The tour it lasts about 2 hours and not both hours are underground, after a first part of about 50 minutes we move outside and to the Greek-Roman Theater partly still underground and partly found "in pieces" in the homes of the people who live near Via dei Tribunali. The ticket price is around 9 € even if the site does not mention prices, you should therefore call or go directly to see before deciding to buy the tour.

The beauty of the tour is given by the caves that have a very special charm. These caves they are born as wells and quarries for tuff with which the city was built at the time of the ancient Greeks and only after it was transformed into an aqueduct. The springs were channeled and wells dug to extract the rock. There are many methods to take the tuff and to pass the water and the Naples Underground guide will also show you the way in which the people who worked below were able to move around the various tunnels without problems.


The quarries were then closed and restored in Second World War also because Naples was the Italian city most affected by the war and below people went to take refuge to escape from the aerial bombs. From the last world war there are many finds below as games for children, who in fact ran away to take refuge below never knew how long they had to stay there.

The most demanding part of the tour, which I didn't do because it was optional, involves the use of candles or torches. You pass through a very narrow and low tunnel and arrive in a large room where there is still a small aqueduct. It's up to you to choose whether to do it or not, but if you are a bit anxious like me ... I don't recommend it!