Mini guide of Moldova for 5 days


5-day trip to Moldova: mini guide of what to see in Moldova for an itinerary to discover the tastes, flavors and culture of a new tourist destination within walking distance.

How many times have it happened to you that you have a long bridge and wander aimlessly, from blog to blog, looking for some suggestions on where to spend it? You don't want to go too far but would you like to discover a new country, perhaps unexpected, far from the usual destinations? Well now, how many of these times the choice fell on moldova?

Today we will take care of telling you something more about this surprising and little known country (in Italy) and to give you an option that you probably didn't think about for your next trip.
The data says that Moldova is precisely among the least visited countries in the world, which makes it an authentic and peaceful destination, with no hordes of people to jostle with. In short, if like us, you love quiet and uncrowded places, Moldova is for you. 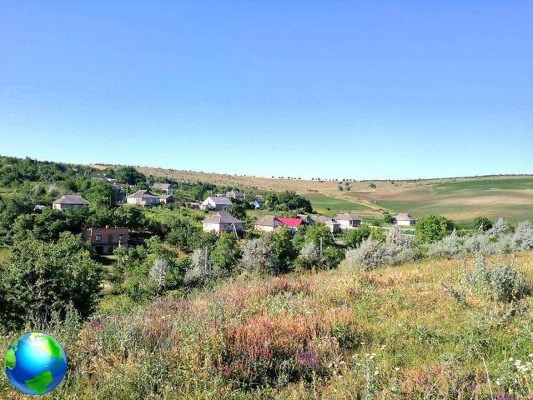 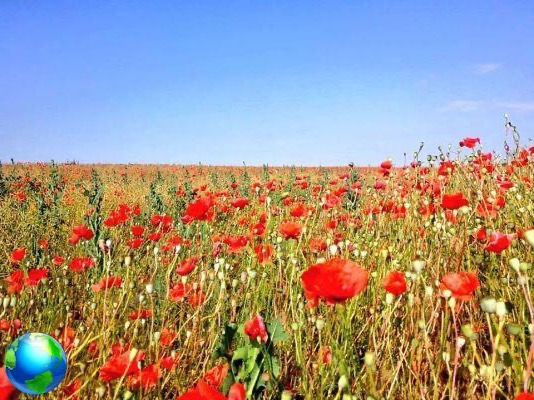 How to reach Moldova

To reach Moldova you can rely on flag carrier, AirMoldova, which operates direct connections with the capital Chisinau from the main airports.
There are also low-cost flights offered by Wizz-Air.
For the trip to Moldova, we flew with AirMoldova and in a couple of hours we arrived at our destination. Five days to discover this country so close but so different. 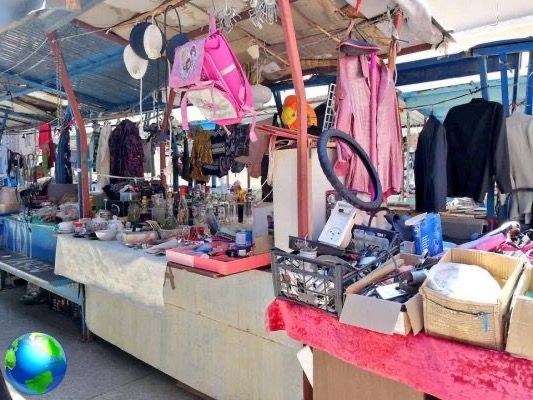 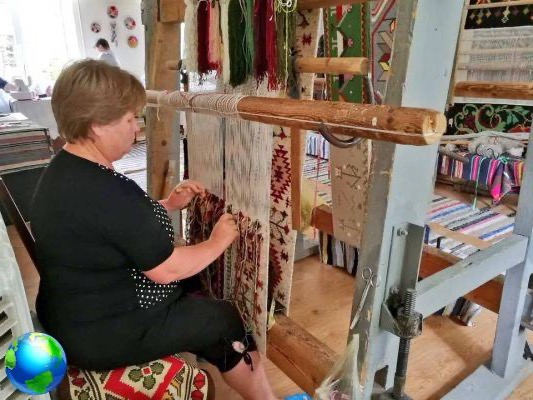 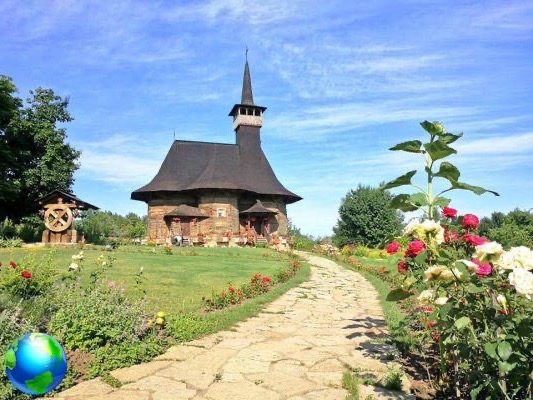 What to see in Moldova in particular

La capital Chisinau I think it is really not to be missed, with its wonderful Orthodox churches (my favorite was undoubtedly that of the Monastery of Ciuflea), the green and tidy parks and the large Central Market (Piata Centrala) of fruit, vegetables, meat, toys, detergents and… chandeliers! Walking through the streets of the city you might have the feeling that time has stopped halfway between the stillness of the past and a massive and colorful reconstruction. Do not miss a visit to the wooden church of the Assumption on the outskirts of Chisinau, but please, go there on Sunday or you won't be able to go inside to admire the interior.

Unmissable a tour for wine cellars. Get ready for a new world, of flavors of course, but also in the true sense of the word: there are, in fact, real underground cities complete with traffic lights and roads that wind for miles and miles under the ground. These galleries were originally the quarries from which the white stone was obtained with which many palaces of Chisinau were built, which is why it is also called the white city. Once the quarries were closed, it was realized that these huge underground spaces, which have a constant temperature of 12-14 ° C, were the ideal place to produce and store wine, especially sparkling whites. This is how the Cricova cellars were born and also Milesti Mici, which is in the Guinness Book of Records for the largest collection of wine bottles in the world: over 1,5 million!

We visited the cellars of Cricova, Purcari e Castel Mimi. Those who have the time to see all three can thus realize how they are very different from each other, albeit united by the passion of those who produce this wine. The first, the Cricova winery, struck me for the beauty and extension of its underground tunnels that stretch for 120 km. The second, the Purcari winery, is the oldest in Moldova (it was founded in 1827) and also offers an excellent restaurant and guest rooms. I was struck by the quality of its pinot grigio and the bike ride through the vineyards. The last one, Castel Mimì, impressed me instead for the 360 ​​° welcoming project that goes beyond the concept of the cellar in a more classic way, but also offers hospitality, meeting and wellness services with an eye to sustainability and, of course , to the quality of production. On average, a tasting in the cellar with a visit costs from 15 to 40 euros and includes pairing with more or less elaborate dishes, depending on the package chosen and the number of wines that will be tasted.

Of particular beauty is also the Curchi orthodox monastery, founded in the homonymous village in 1773. It is one of the largest monasteries in Moldova, built under the guidance of the Italian architect Bartolomeo Rastelli in an original classical baroque style.

Last but not least in importance or charm, is the landscape and archaeological complex of Orheiul Vechi (candidate to become a UNESCO heritage site), with the bright colors of the fields dominated by the ancient monastery on top of the rocky ridge that follows the bends of the Raut river. Here, in the rock, you can still see the cells of the monks who had retired there to escape the persecution of the Tartars. Even today the structure is inhabited by an elderly monk who welcomes passing guests with silent privacy and where it is possible to slip a coin into the rock as a good omen. At the foot of the monastery is the Butuceni eco-resort, a village that has been transformed into a widespread hotel and offers hospitality in the typical colorful houses. 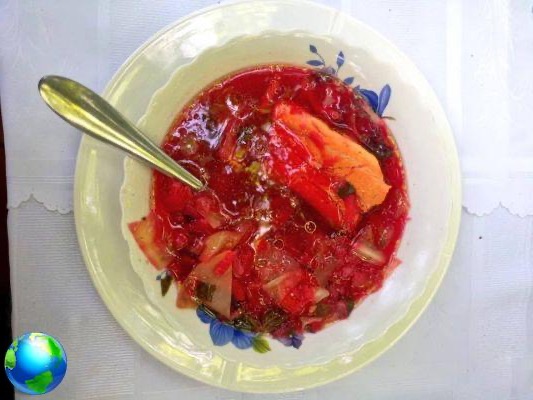 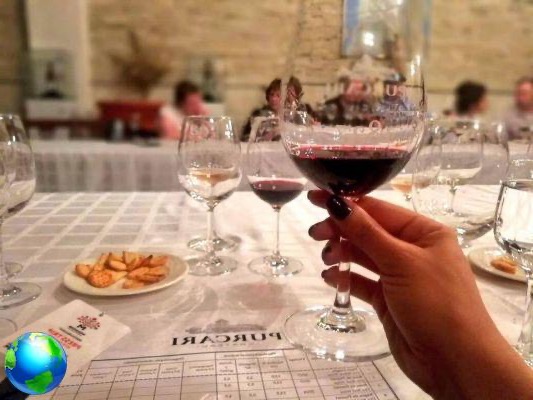 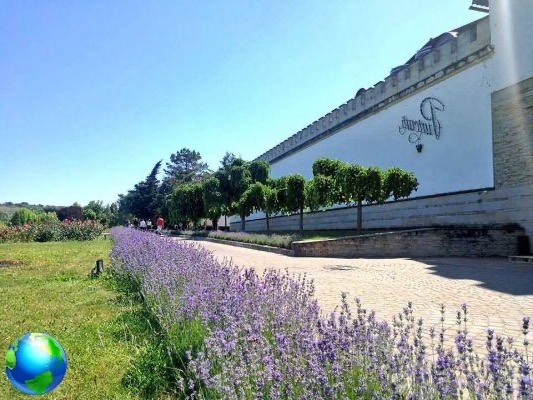 What to eat in Moldova

One thing is certain: the Borsc you can't not taste it! This is a flavorful one beetroot soup, legumes and meat of Ukrainian origin, but also very widespread in Moldova.
As in Italy, bread plays an important role on the table, we find it as an appetizer used in a similar way to our bruschetta, but also as an accompaniment to traditional vegetable soups. Another typical Moldavian dish and very dear to Italians is the corn polenta (mamaliga). Tradition has it that it should be cut with a twine thread: it is passed underneath up to the middle and then raised and made a first cut, then a second perpendicular and the game is done. Polenta is mainly served with meat dishes, cooked in many different ways, and cheese. Other traditional Moldovan dishes are le sarmale, rolls of vine leaves or cabbage stuffed with meat and rice, and placinte, a fragrant puff pastry filled with vegetables, cheese, meat or even fruit. 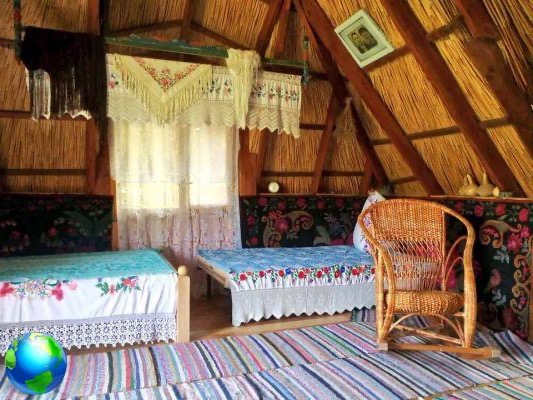 Where to sleep in Moldova

Our choice was to stay in the capital al Thomas Albert hotel, as most of the things to see can be easily reached by car within a day from Chisinau, where there are hotels and apartments for all tastes and budgets.

For those who prefer to sleep outside the city we recommend the family run guest house. I liked one in particular: that of Mr. Pavel and his wife, in Cioburciu. The tranquility of the river, the thatched-roof houses on the tree, the berries in the garden, the vine and the wooden swing make this place truly special. Here it is possible to spend a few days between bike rides, canoe excursions, participate in a vegetable fiber embroidery course, pay a visit to the nearby Purcari winery and above all listen to the stories of the lady of the house in her perfect Italian. It costs a few days to stay here 20 euros each with full board.

To organize your trip to Moldova we recommend that you visit the official tourism website: Moldova Holiday and Moldova.travel.

Audio Video Mini guide of Moldova for 5 days
Legoland in Denmark, not just for the little ones ❯

Moldova seen through the eyes of a student, 5 low cost things

add a comment of Mini guide of Moldova for 5 days