Seaside villages where it is possible to rediscover the slow and peaceful life of the past, enjoy a breathtaking view and enjoy excellent cuisine.

With this post, we take you to the discovery of seaside villages of the Marche coast.
It was the year 1300 and the whole Mediterranean was infested with pirates.
The terror of the seas.
The Adriatic sea, either for its conformation, for the shallow water and for the close distances, was the ideal destination for pirates.
To escape these looting, the inhabitants of the coast took refuge high up.
In fact, by sighting the pirates they could take shelter from their fearsome attacks.
Thus was born the villages perched overlooking the sea. 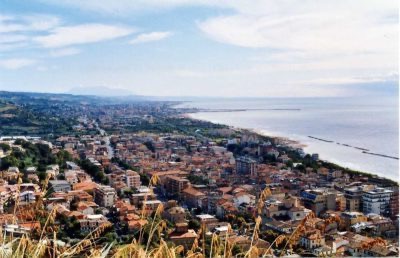 The Adriatic coast is dotted with these examples.
In the southernmost part of the Marche region there are in fact several examples of villages still preserved today and which are seeing a rebirth due to their position.
In fact, if they were abandoned during the nineteenth century, today they are characterized by a strong personality that makes them, precisely because of their panoramic location, jewels to visit.

The first of the villages that we can visit is located in province of Fermo.
It is located on a rocky spur at 104 meters above sea level
Its political history is very eventful.
From Picene origins, it passes in fact under the Romans.
Its construction, however, derives precisely from the incessant pirate raids.
The ancient watchtower is still clearly visible today.

Arriving in Torre di Palme you can take the typical medieval streets to then arrive at a magnificent balcony overlooking the Adriatic.
On clear days the view is incomparable as well as the sea breeze you breathe.
The ancient village is dotted with restaurants and above all churches.
Despite the modest size of the village there are three churches.
La Church of Santa Maria a Mare of the twelfth century, the Church of Sant'Agostino of the XIVsec. - which houses a polyptych by Crivelli inside - and the Church of St. John of the eleventh century.

If you are looking for a location for your wedding, consider this beautiful village for your ceremony, in fact in the area it is also known as the village of the spouses.

After art, culture and - why not - food too, there is certainly room for nature too.
In fact, under the slopes of this cliff there is a circular route two kilometers that will take you inside the Bosco del Cugnolo.
A rare area of ​​Mediterranean scrub present in the territory.
The peculiarity of this area is the so-called Cave of lovers.


Two young people, Antonio and Laurina, in 1911 chose to put an end to their lives here, throwing themselves into the abyss.
A romantic story that frames this splendid village.
The village then throughout the summer is the setting for markets, cultural, theatrical and singing events.

The peculiarity of this village is that already from the road it inspires fear.
It is a fortified village, with mighty walls but above all with challenging slopes.
Inside the village there is the Archaeological Museum of the territory and the Church of the Annunziata inside which there is a permanent nativity scene of Spanish art by Paolo Fontana. 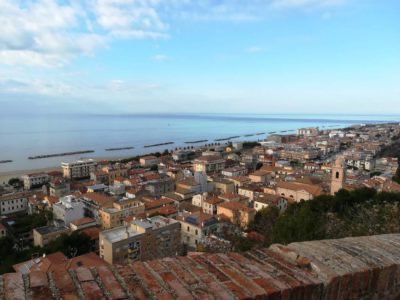 Here too you can walk the classic medieval streets and you can lose yourself in the splendid views offered by the terraces overlooking the sea.
To underline its defensive function there is, near the old town, the Sant'Andrea Castle which, however, is now in very bad conditions.

The first week of November the town is decorated and embellished for the historical re-enactment of the chestnut in medieval clothes.
The town is filled with monks, nuns, jesters, blacksmiths and so on.
For the occasion, metal coins with the logo of the Castello di Marano are also beaten.
You will feel like you are taking a dip in the past.

Of the four villages taken into consideration, it is undoubtedly the best location for taking souvenir photos and eating.
It has undergone a major renovation and today it gives its best.
The town is dotted with small houses perched one on top of the other, of Hanging gardens and orange and lemon plants that will catapult you with their smell into another atmosphere.
The atmosphere at sunset is magical and you can then enjoy an aperitif overlooking the sea, with the lights of the restaurants on which help to make everything more romantic.
In its mazes you will find many clubs, restaurants, bars, to enjoy an aperitif or to make complete meals. 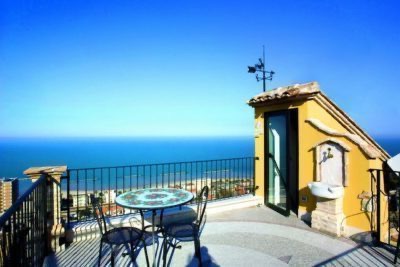 There is also a balcony closed by cross vaults which directly overlooks the village below and the vastness of the Adriatic Sea.
Inside the village there are several museums: the Sistine Museum of Grottammare, the Tarpato Museum and the Pericle Fazzini Museum.
Also you can visit the Church of Saint Lucia, commissioned by Felice Peretti (Pope Sixtus V), which stands on the spot where the Peretti family's house once stood.

Certainly speaking of this city immediately comes to mind Riviera of the Palms.
Expanses of fine sand and palm trees to frame the Adriatic Sea.
But in reality there is also the old village.
Many houses next to each other, narrow and tall in the shape of a tower, built in a concentric manner in a defensive manner and in the midst of all this, the Tower of the Gualtieri. 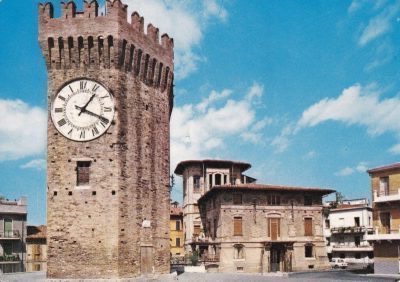 Even the old part of San Benedetto is dotted with restaurants where you can taste all the goodness of fresh fish from the Adriatic.
Inside the village, it is not possible not to visit the Church of San Benedetto, named in honor of the patron saint of the city.
In fact, the church, remodeled during the XNUMXth century, is located above the saint's sepulcher.

Seaside villages, made of bricks and stone, recklessly built on spurs of rock and inaccessible to reach.
Precisely because of their ability to defend themselves they have arrived almost intact to today's days.
Their walls, sometimes mighty, their towers that proudly rise above the blue of the sea, have resisted centuries of battles and invasions.

Today they are villages where it is rediscovered the life of "once upon a time", slow and peaceful.
From these jewels you can enjoy a breathtaking view, exquisite gastronomy and an excellent sea breeze that will cool you on the hottest days.

add a comment of Marche coast: 4 villages perched on the sea