Lithuanian dishes not to be missed: 5 tips

A cuisine with a strong link with the territory, with the seasonality of the products. A cuisine that takes advantage of the centuries-old knowledge of farmers and fishermen, here's what to taste while traveling in Lithuania.

To the customer who will try them for the first time, i Lithuanian dishes they will be sincere, enveloping, greedy and with the flavors of home. It is a cuisine that has the advantage of immediately putting the foreign diner at ease. At the same time it will offer him the possibility and the pleasure of being discovered gradually, revealing an unexpected complexity and refinement. 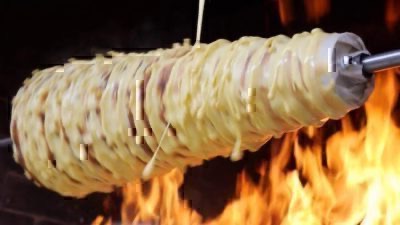 A cuisine with a strong link with the territory, with the seasonality of products, which makes use of the centuries-old knowledge of the farmers who harvest and marinate. But also the fishermen, who fish and smoke. Lithuanian dishes use wild and meaty mushrooms, wild herbs such as dill, fresh and with slightly balsamic notes. Garlic, with its pungent flavor, and the fat but greedy meat of salmon and pigs, reared as they once were. And then all the "fruits" that the earth protects from harsh winters, such as potatoes, turnips and beets. To find out all this, here you are five Lithuanian dishes to try, symbols of a rich and varied culinary corpus.

One bite of the national dish, Cepelinai, can immerse you in traditional Lithuanian peasant cuisine. Poor ingredients, rich flavor. A dish that, alas, is cooked less and less frequently in home kitchens. Characterized by almost biblical preparation times, typical of grandma's dishes. Fortunately, it is not so complicated to find in restaurant menus, whether they are of typical cuisine or not. 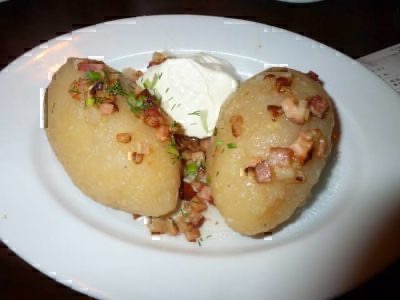 But what are the cepelinai? At first glance they appear as large potato balls stuffed with meat, but they are much more. Already at the first bite we will be surprised to discover an unexpected texture of the potatoes. In the traditional recipe, in fact, the yellow tubers are grated and left to drain. The resulting pulp is used to wrap minced pork. A step in abundant boiling water and the dish is ready! To enrich the whole they are accompanied by various sauces. From the most classic based on sour cream, onion and bacon, to sauces based on wild mushrooms. A handful of fresh dill is a must, essential to give a note of color and freshness.

Balandeliai are green cabbage rolls (sometimes replaced by savoy cabbage) stuffed with rice, minced pork and peppers, simmered in a thick tomato sauce. Recurring dish in Eastern Europe (in fact there is both a Belarusian and a Polish version). The balandeliai unequivocally reveal a link with the cuisine of the Near East. On the other hand, if we are talking about a leaf with a filling of rice and marjoram inside, how can we not immediately think of the dolmades, meze typical of Greek-Levantine cuisine? The Lithuanian version is certainly richer and more substantial (and caloric), but this is not surprising. In fact, the warm winds of the Mediterranean are far from the hiding places of Vilnius. Food is the most popular natural fuel to cope with the cold! 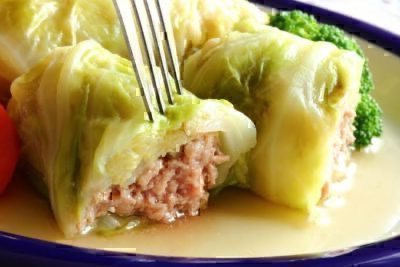 Considering that almost 40% of the national soil is covered with woods and forests, it is not surprising that in Lithuania, mushrooms are a serious matter. Suffice it to say that in elementary schools: together with mathematics and history, children are taught which mushrooms can be picked, why edible, and which are not. The best way to savor this delicacy of the underbelly is by eating the grybos sriubo, the mushroom and potato soup that tradition wants to be served in a “casket” of local wholemeal bread. Rich, creamy, with a wild taste, the flavors of the soup are offset perfectly with the rye bread, which is fragrant, fragrant and crunchy, thanks to the flax seeds and cumin embedded in the soft crumb. A simple dish but able to warm the soul, stomach and heart like few others!

4. The Gazpacho of the Baltic

Saltibarciai, The "Gazpacho del Baltico" will captivate you for its color: a bright and lively fuchsia, as unusual for a dish as it is beautiful and cheerful to look at. The most popular dish of the Lithuanian summer (which can turn out to be unexpectedly warm and bright). It is a soup made with boiled and grated beets and Kefir, the drink deriving from fermented milk typical of "oriental" countries (from Croatia to Siberia, passing through Istanbul and Kabul).
To give body to the soup, coarsely crumbled hard-boiled eggs and crunchy cucumbers. Once again in an apparently simple dish we find taste and balance: The earthiness of the beets is balanced by the acidity of the kefir, and the red yolks give a fat and almost buttery note. Last, but not least, the dill, which sprinkled fresh in abundance cleans the palate with each spoonful and prepares us for the next! 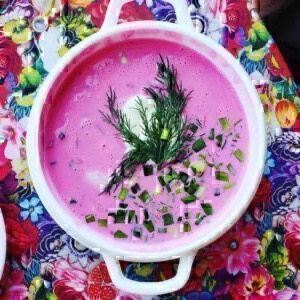 Imagine a large horizontal spit where instead of meat, to absorb the heat of the open fire there are egg yolks, sugar and butter: here is the Sakotis. The Lithuanian dessert of holidays! Nice to look at with its typical Christmas tree shape, and good to eat, with its full and decisive taste, similar to a crunchy sponge cake! During a Christmas dinner or a wedding banquet, Sakotis is displayed in plain sight at the center of the table, and diners can detach one 'branch' at a time to munch on it while toasting with vodka and prosecco (it has now arrived there too ). In shops and supermarkets it is also available all year round in miniature version (a bit like our packs of mini panettone), therefore perfect as a souvenir for those in need of a little sweetness!

Five restaurants in Vilnius not to be missed

What to see in Kaunas in three days

Paluse and the Aukštaitija National Park

add a comment of Lithuanian dishes not to be missed: 5 tips