Lecce: visit of the capital of Salento 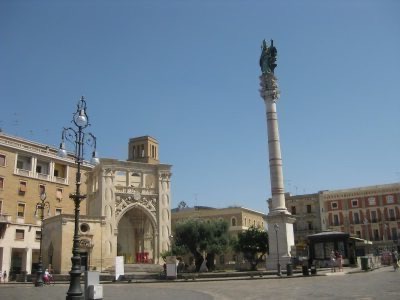 Lecce is a city of art known for its Baroque architecture, with a historic center studded with monuments, palaces and churches of exceptional artistic beauty.
Piazza Sant'Oronzo, the beating heart of the Salento capital, is the ideal point to begin an itinerary to discover the marvelous ancient Lecce.
The square, which takes its name from the statue of the same name located in the center, also hosts the Seat, a monument from the Venetian era and the Roman Amphitheater, testimony of the ancient Lupiae, founded by the Romans between the XNUMXst and XNUMXnd centuries AD

It is certainly ahead of the Basilica of the Holy Cross who are delighted by the particularity of the details that make up the baroque facade.
Corinthian columns, anthropomorphic and zoomorphic sculptures, symbolic decorations, mighty portals and ornamental rose windows are architectural elements of the Renaissance and Baroque perfectly integrated in this building of extraordinary value.
To see the Latin cross interior with the gilded wooden coffered ceiling, columns with Corinthian capitals and numerous altars embellished with valuable canvases and paintings.
Next to the Basilica you can admire the Celestini Palace, former convent, now the seat of the Prefecture of the Province of Lecce.

Walking through the beautiful streets full of shops, clubs and restaurants you arrive in Piazza Duomo, where there are other important monuments such as the Duomo, the Bishop's Palace, the Seminary and the Bell Tower. There Cathedral, in typical Lecce stone, has two entrances: the first with a sumptuous facade on the square and the second on the side, but in reality it is the main one, with a more sober and linear style. The central nave with a wooden lacunar ceiling and the main altar in marble and bronze dedicated to the Assumption of Mary is remarkable. Inside it is also possible to visit the medieval crypt.
Next to the Cathedral there is the Bishop's Palace, with the loggia and the clock among the oldest in the town; the Seminary follows, which preserves a richly decorated well in the courtyard, the work of the architect Giuseppe Cino, the greatest exponent of the Lecce Baroque.

On the opposite side stands the Campanile of the Duomo; 68 meters high and divided into five floors, it is one of the highest in Europe. The panoramic view of Piazza Duomo is splendid and in the evening with the soft lights the show is of great effect. To visit also the Castle of Charles V, not far from Piazza Duomo; dating back to 1500, it is quadrangular in shape with enormous bastions and two monumental entrance doors.
Just outside the old area, in defense of the city, there are 3 ancient gates: Porta Napoli or Arco di Trionfo, Porta Rudiae and Porta S. Biagio.


You cannot leave Lecce, however, without having stopped in one of the many bars and pastry shops and tasted one of the Salento delicacies: the leccese pasticciotto with cream.
A delicacy to be pleasantly enjoyed at any time of the day, walking through art, millenary history and the lively atmosphere of a town called the "Florence of the South".

Audio Video Lecce: visit of the capital of Salento
Visiting the Loacker factory, here is the World of Goodness ❯

add a comment from Lecce: visit of the capital of Salento