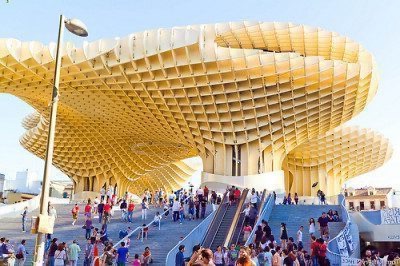 Moors and Christians clashed over its territory, e Seville bears the signs of it. Thus from the ashes of its mosque, the largest Gothic cathedral in the world was born, and the secret Mudejar-style rooms and patios of the Alcazar Real housed Catholic kings. This is why in the city center, next to the Iglesia de la Anunciación, in Plaza Encarnación you don't really expect to find this huge modern structure, with Valencian features.

Il Metropol Parasol of the Incarnation, better known by all Sevillians as Las Setas (mushrooms) leaves everyone who sees it for the first time speechless. Entirely of white wood, slender and sinuous, it was built between 2005 and 2011 by the Berlin architect Jürgen Mayer, following a competition held by the municipality of Seville for the redevelopment of the square.

Many le controversy that this son of contemporaneity carries with him, but if you get on the mirador through an elevator for the modest sum of 1 € and 20, the view that opens in front is nothing short of spectacular.

A long walkway that rises and falls harmoniously along the entire length of the Metropol will lead you in front of the beauties of the city: the Giralda Torre dell'Oro, the Campanile of the Macarena, the dome of the Church of Santa Cruz ... And on Saturday afternoon there is nothing better to do than escape the river of people that populate the shopping streets, and run away for a coffee or a cool beer on the top of Setas. There cafeteria and bar, which makes excellent cocktails, in fact it does not have high prices, the cost of a coffee is the same as in the city (about 1,20) and the same goes for a beer or a soft drink.

Under Las Setas you will find a colorful market city, with typical and fresh products, and points where you can eat and enjoy excellent tapas, and theantiquarium, an archaeological museum that describes the history of Roman Seville

Audio Video Las Setas in Seville, Saturday afternoon coffee
But what have you come to Rome for, a beer in Trastevere ❯

Sleeping in Barcelona in an apartment

A weekend in Valencia, that's where you find me

Cartagena, what to see in one day in Murcia