Lanzarote: the island of flavors, colors and summer in the Canaries

What to do and what to see in Lanzarote and the Canaries. A week-long trip may be enough, but if you are very good at organizing activities and especially relaxation!

Think about the Canaries immediately brings to mind an image: a incredibly blue sky, sprinkled with many low clouds, which with their shadow draw a thousand shades on the slopes of the hills and volcanoes. Given that a few days are not enough to experience all the wonders of these unique islands, I assure you that it really takes a moment to fall in love with these places. 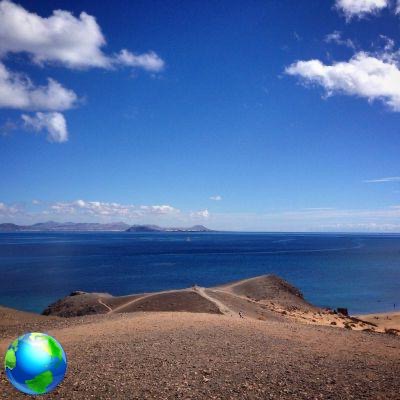 An island that amazes

I returned full of energy from the fantastic and adventurous #CanarieBlogTrip, which led me to visit two of the islands that make up the Canary archipelago: Lanzarote and Fuerteventura. I found Fuerteventura more sunny, while Lanzarote with a more lunar, dark and apparently barren landscape. I say apparently because in reality there is a lot of vegetation, cacti and lichens that have been able to survive the force of time and the inclemency of nature. Lanzarote was born approx 22 millions of years ago from the seismic activity of its volcanoes, and the lava land has made its way characterizing the history and morphology of the island. 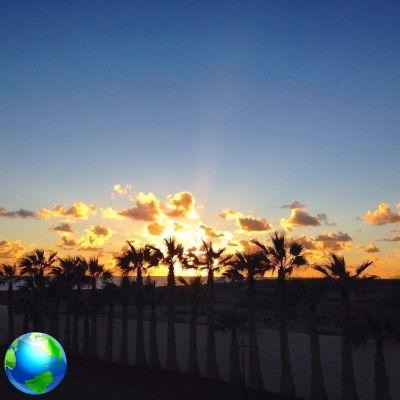 Here, too, the wine grows, making space between the lava ash and non-irrigated lands, as we have seen with our eyes in the vineyards of the La Geria area: the vines grow in many round basins obtained from the ash, it seems incredible and yet it really is. A true force of nature. 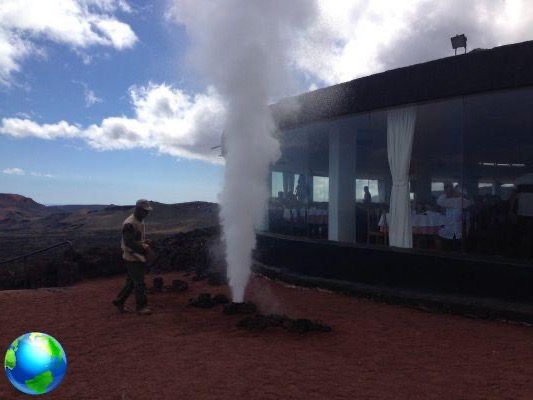 The island is different from what I expected and has surpassed all my expectations: I thought it was extremely windy, but no, there is a very pleasant breeze, trade winds blow from the sea and you can practice all possible and imaginable water sports… but no whipping wind! I discovered that September and October are the least windy months, ideal for those who want to enjoy sun, sea and relaxation. The temperature is pleasant, the climate temperate all year round and the ocean water much warmer than I imagined: a mild summer that lasts 12 months, practically. There are amazing beaches with sands of all colors: black, like Famara Beach, and gilded, like the splendid and panoramic Papagayo Beach. I recommend it because it is easy to reach, with a splendid panoramic walk between slopes and gentle cliffs overlooking the sea, with panoramas and glimpses that will make you feel a bit at the center of the world. 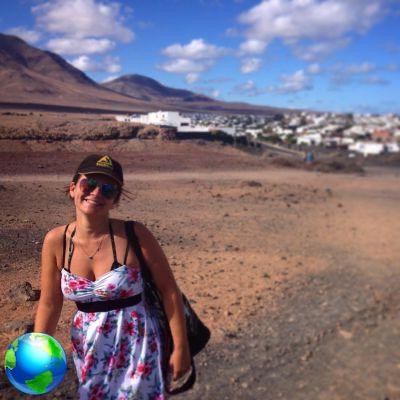 The colors of Lanzarote

Il black predominates but it is not the only color of the island: there is the green of aloe vera, cultivated and processed for its extraordinary cosmetic and herbal qualities; there is Emerald of the spectacular Green lake of Lanzarote, which creates a breathtaking contrast with the cliffs that surround it. There is thesilver of prickly pears, the gold of the radiant Playa Blanca, the golden beach in the south of the island, and the crystal color of the sea. 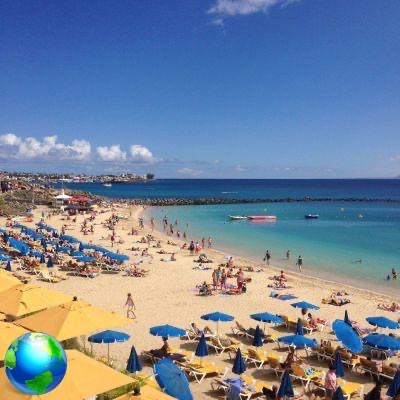 Then there is the White houses. It seems incredible but the houses of Lanzarote are all white and with green frames, built in lava stone and covered with white lime. This unique landscape, in contrast with the dark tones of the island, is due to the intuition of a brilliant and visionary artist named César Manrique, in love with Lanzarote and the Canaries. Manrique worked hard for the beauty and livability of the islands: you will find his taste and personality by visiting his house museum, the Fundacion César Manrique a few steps from which the artist died in a road accident. Pedro Almodovar was inspired by him for his film Broken Embraces, shot in Lanzarote. 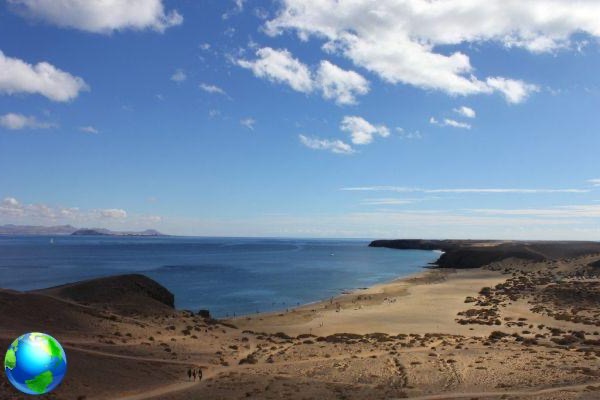 The strength of the earth in its pure state, the magnificent lunar landscapes created by lava, i geysers still active: at the Timanfaya National Park you will see all this, and more. Imagine the lava exploding, flowing and drawing entire valleys, in a power that can still be perceived today. You will touch the picon, which looks like gravel but is actually volcanic material that transmits all the heat from the volcano below - we are talking about 600 degrees at just 15 meters. 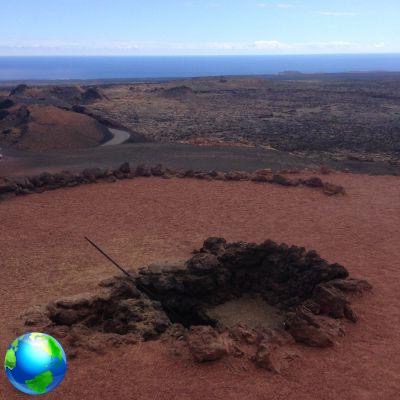 Exploring the Montañas del Fuego and from the viewpoint of Montaña Rajada you can admire a majestic panorama, slopes of lava that descend to the sea; we did the visit on a minibus, but if you want you can also do it on the back of a dromedary! If in all of this you get hungry, there is a chance to eat meat cooked directly on the embers of the volcano, right under your eyes. This is possible because no sulfur comes from these natural ovens: a natural mega-barbecue, in practice. 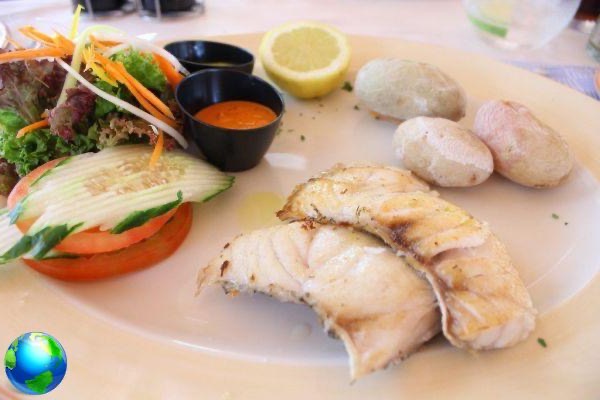 Flavors of Lanzarote and the Canaries

The flavors were a discovery. Don't miss the canarian octopus, which we tasted atPrinceza Yaiza hotel, in one of the lunches that I liked the most. I recommend accompanying it to the dish that has become a favorite of this whole trip: the papas arrugadas. Simple and delicious, they are potatoes cooked in salted water and which arrive covered with a delicious and thin crust of sea salt; they are served hot and accompanied by mojo rojo sauces e green mojo, very tasty, 100% Canary flavors. 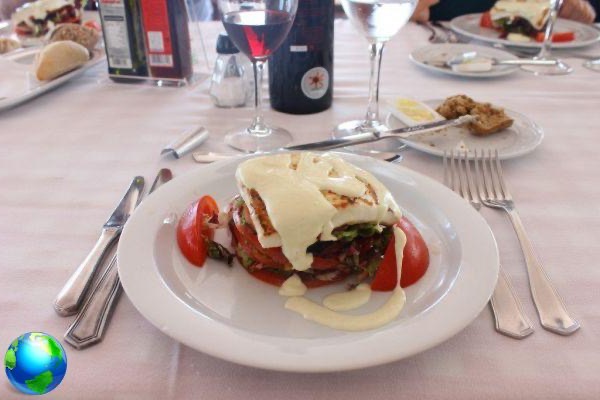 The most spectacular dinner was the one at Jameos, in a unique setting: here we dine in the bowels of the earth, in a cave created by an eruption of lava about 3000 years ago. Imagine a huge pond with crystal clear waters, populated with tiny ones white crabs cute and autochthonous (the Munidopsis Polimorpha), surrounded by an exotic cave and perfect acoustics: in reality it is not a pond but the sea, which digging made its way up to here. After dinner, concerts of great atmosphere with the typical instruments of the island.

To get to the Canary Islands we flew with Vueling, which has daily connections to the Canaries, with change in Barcelona or Madrid. When I landed in Lanzarote I was very tired: the connecting flight from Andalucia was skipped for a few minutes, and so the journey got longer. Just arrived at Sands Beach Resort Costa Teguise, however, I must say that everything has passed me by! I strolled among its colorful terraces and pools, took a nap under a palm tree and a swim in the sea, and instantly recovered. There is also a lagoon where you can practice SUP, stand up paddle surfing, which will appeal to those who want to experience the thrill of surfing, but without the ocean waves. 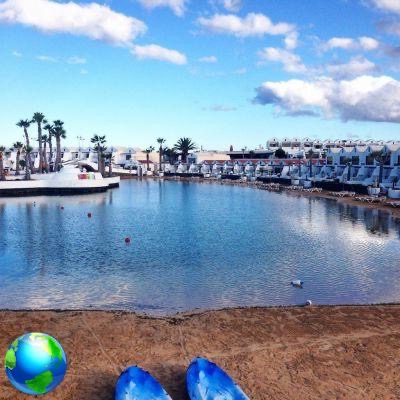 Audio Video Lanzarote: the island of flavors, colors and summer in the Canaries
Spain: the best design hostels ❯

add a comment of Lanzarote: the island of flavors, colors and summer in the Canaries