In Nantes for the weekend with Volotea: it's worth it 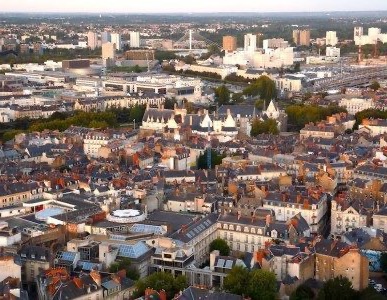 As some of you already know this has been a little weekend for us special, I have been to Nantes, to discover the city, thanks to Voilà la France.

I had never been to Nantes and therefore I was starting from scratch, but with a thousand curiosity! I also wanted to try the airline company Volotea, which has just inaugurated the route Bergamo-Nantes. A but I like to travel always and in any case, but the question that gripped me most was: flying to Nantes for the weekend, will it be worth it?

I tell you right away that the answer is yes, it is absolutely worth it!

Nantes is full of goodies and so are its surroundings (the region of loire Atlantique with its Works of the Estuary) and is a young city, full of art and culture. He was able to deal with the past and reinvent himself: we have seen him well in the beautiful Castle of the Dukes of Brittany and in Memorial for the abolition of slavery, but in reality a glance at the city is enough to notice it.

Nantes seemed like a construction site for igoddesses and creativity in the open: has converted the old factories for shipyards in something amazing, the Machines de l'Ile (I'll tell you more about it in another post because it deserves it) and even in trendy bars! I think of the beautiful and trendy Lieux Unique, once LU biscuit factory and now bar, library e multipurpose space.

Nantes is all a bit artistic and polyvalent, not for nothing it is the city that gave birth to Jules Vernes, that of Twenty Thousand Leagues Under the Sea!

Il Old Town it's very nice, especially the medieval quarter di Bouffay full of creperie, cafes and restaurants where you can eat well without spending too much. We stayed in the neighborhood of Gaslin - definitely quieter in the evening - and ate in the magnificent restaurant Cygale, in front of the Opera. Our hotel (Pommeraye hotels, nice, with rooms in different styles) I recommend it to those looking for a quiet place, as it is surrounded by pedestrian streets and a stone's throw from the historic Passage Pommeraye, but not for those looking for a bit of nightlife. Bouffay for nightlife is better ;-)


To move easily in the city there is the Nantes Pass, which allows you to use all public transport and to have discounts in the museums and expo of the city, very convenient.

Last but not least, the food: in Nantes you eat well, especially if you like fish and seafood, and you drink an excellent white wine, the Muscadet. If you like, I will also reveal my favorite panoramic place to drink it!

I forgot: we also got along very well with Volotea: smiling crew, comfortable plane and lean flight. The suitcases arrived very fast, well the plane was not exactly packed ;-) A great flight, anyway. Well, yes, fly to Nantes it's really worth it!

Audio Video In Nantes for the weekend with Volotea: it's worth it
Getting to Lake Orta from Milan ❯

add a comment of In Nantes for the weekend with Volotea: it's worth it