The Four Corners Monument, is one of the most curious attractions in the United States. Not only is it the perpendicular intersection point of the four corners, but it is also the only place where the borders of 4 American states meet.

This place that many talk about is located in the Indian lands of the Navajos and the Utes, and marks the meeting point of four American states: Arizona, Colorado, New Mexico e Utah.

The Monument of the Four Corners

The location of the point was initially discovered in 1868 and was marked with a sandstone pedestal. Later, in 1912, the pedestal was replaced by a first permanent marker.

While since 1992 the position is indicated by a granite pedestal, with a bronze circle around the point. This disc is divided into 4 parts and is surrounded by shields and flags of the 4 states that overlook it.

Il Four Corners Monument it is located on the Colorado Plateau, west of Route 160. The point was originally named by the United States Congress, but because of a first geographically incorrect measurement, is in the wrong position.

Later having become a very popular venue, the US Supreme Court ruled that this would become the official one. The Monument of the Four Corners is located near the Monument Valley, about 150 km. 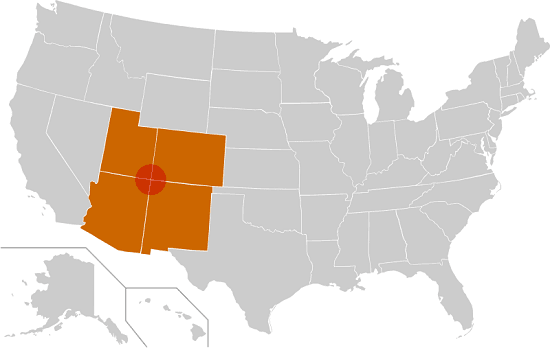 Map of where the Four Corners Monument is located

Located in the Colorado Desert region of the southwestern United States, the Four Corners Monument has a fort desert climate. Winters are cold and sunny, while summers are hot and dry.

The maximum temperature in summer can reach 40 °, while in winter it can drop even below - 20 °. Therefore the best time to visit the place is in spring and autumn.

The monument is operated by Navajo Nation Parks and the Department for Reconstruction. Although the place is far from tourist tours and a much visited attraction, especially by the American people.

To visit the monument and take some photos you need to pay one $ 3 fee, which serves to maintain and care for the place. Around the monument, local artisans belonging to the Navajo and Utes sell souvenirs and food.

Where to stay near the Four Corners Monument

There are no hotels or accommodations to sleep near the Monument of the Four Corners. The closest hotel facilities are located about 50 kmHowever, in the United States the country of long distances 30 miles is not a great distance.


You can stay in Farmington or Cortez, or in Bluff or Kayenta to also be close to Monument Valley. For sleeping we recommend the following facilities:

Mokee Motel to Bluff at 55 km - an economical option too

Retro Inn at Mesa Verde in Cortez at 58 km

Super 8 by Wyndham Cortez/Mesa Verde Area at 56 km - a good budget choice, not far and for sleeping in the city 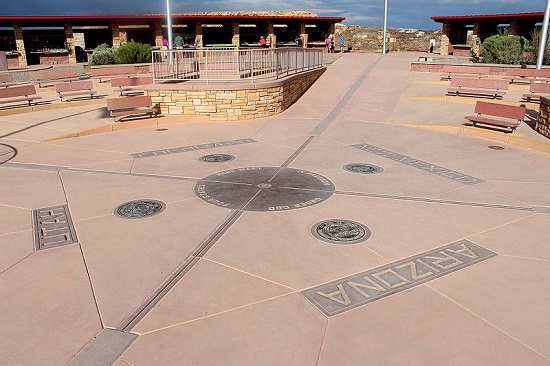