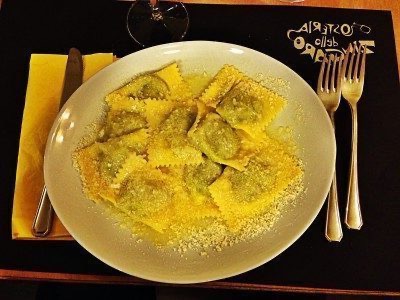 In the heart of the Emilian Food Valley, Parma is known all over the world for its gastronomy: the small elegant and refined Paris, which has become an emblem of Italian cuisine in the world. In fact, there are many stories of Parmesan people who “made it”, become real institutions of gastronomy, in cities like New York or London. However, when you find yourself wandering in the alleys of the little one Emilian town, it is not always easy to find the right place to taste the typical specialties at the right time. In fact, despite its small size, the historic center of Parma is always frequented by tourists, with the consequence of a slow, but inevitable process of "standardization" of its cuisine.

Between the poetry of its cobbled hamlets, the architectural beauties, the atmosphere of a northern European town, dotted with frenetic bicycles at any time of the year, it is not so easy to find a restaurant or trattoria that leaves a clear and strong memory of the parmesan dining experience. It almost seems like getting closer to Piazza Garibaldi (the heart of Parma) is directly proportional to the increase in prices, while indirectly proportional to the quality of the menu offered.

There are still however some places that retain some respect for the local tradition by proposing typical dishes and following the true principles of Parmesan cuisine, even if sometimes it can be difficult to understand, because apparently very simple.

A few steps from the Duomo, theOsteria dello Zingaro it shyly overlooks Borgo del Correggio, one of the most central streets of the city. The room is small and cozy, with low ceilings typical of a tavern, although it has modern furnishings. The atmosphere is rather homemade, you are greeted by the host and a aperitif based on cracklings, offered on the counter. The menu is mainly meat based (well, not the place for vegetarians), starting as an appetizer with cold cuts platters our homemade products, small portions, but really of excellent quality: from culatello to culaccia, from cooked shoulder to the more traditional raw ham. Few dishes, but which respect the typical cuisine, such as the inevitable tortelli d'erbetta, made with a thick dough and a full-bodied and tasty filling, seasoned with butter and parmesan, to enhance the taste to the maximum.

Definitely particular are the tagliatelle with ham, a dish that one would never imagine eating in a restaurant. Simple noodles topped with butter and cheese, in pure "homemade" style, the noodles we have all eaten, seasoned in the simplest way possible. The final touch of raw ham cut into thin strips and served "cold" enhances the flavors, transforming a dish that would leave anyone thrilled by its extreme simplicity, into a refined dish with a delicate but well defined flavor.

But the Osteria dello Zingaro is known above all for the main courses based on horse meat, like pesto or tartar. One of the most typical dishes of Parma is precisely the pesto: ground raw horse, served with rocket and flakes of parmesan. Other peculiarities are the stuffed rabbit roll and the pork cheek with balsamic vinegar. The selection of wines is also not bad, from the local sparkling reds to the more refined Montepulciano, Nero d'Avola, Chianti and Sangiovese, perfect to accompany appetizers and main courses of meat.

Osteria dello Zingaro combines the soul of a trattoria with the elegance of a restaurant or wine shop. In his intent to propose a cuisine with traditional flavors, he succeeds perfectly, putting simplicity in the first place. A right compromise between quality and price, and an excellent idea not to get lost in a miserable dish of pre-cooked tortelli or medium quality salami.

add a comment of Eating in Parma, Osteria dello Zingaro