Croatia, vacation on the island of Brač


How to get to Brač, plane, transfer to Bol and then ferry to the island of Brač for a low cost holiday, read the post.

Too often the holidays at sea are synonymous with crowded beaches, with boys playing beach tennis waking you up with their screams, children that run covering you in sand. So I had some doubts before booking a week in Croatia. I had discarded other popular destinations, such as Sardinia and Greece, due to the high costs in August, but the advice of a friend that Croatia know her well convinced me to spend a week in Pain, a small town located in the southernmost stretch ofisland of Brač. 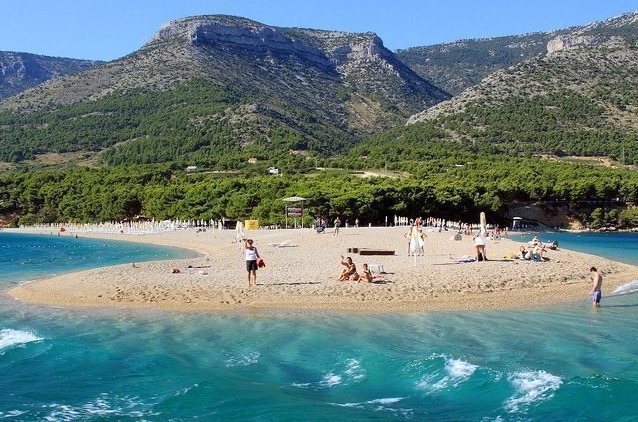 I prices they are not inexpensive, but the costs are much lower than those that should be incurred for a similar holiday in Formentera or Santorini, for example. With a series of tricks it is not difficult to spend a week in Bol without spending a fortune.

How to get to Bol

The best option is obviously to find a direct transfer: you fly to Split without a stopover with Vueling or with a stopover with Easy Jet. I bought the ticket for the flight a couple of months before departure, spending about 70 euros each. with hand luggage only (with a little organization you can easily fit everything in a cabin approved backpack). 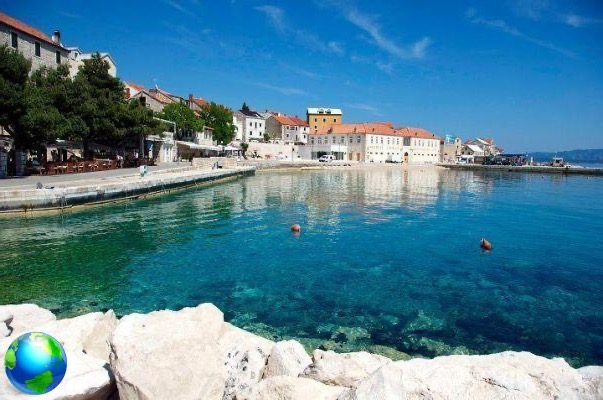 Once you have landed in Split you have to move to the port, take the ferry to Supetar, on the island of Brač, and from here reach the town of Pain. Public transport is not too reliable and the distances are not negligible: 40 kilometers from the airport to the port of Split, and another 45 from the port of Supetar to the hotel. The most comfortable option would be to to rent a car, but the cost was around 300 euros, to which almost 50 were added for the ferry. I therefore chose to contact the Fox Transfer transport service: a driver met us at the airport and from there he took us to the port, where we took the ferry to Supetar. After less than an hour of navigation, we found a second driver at the pier who took us to the hotel. The cost is about 110 euros each for the round trip, including the ferry ticket. It's certainly not cheap, but it's still cheaper than a rental car. Those who prefer to have a means of transport at their disposal must remember to book a parking space on the ferry through the Jadrolinija website. 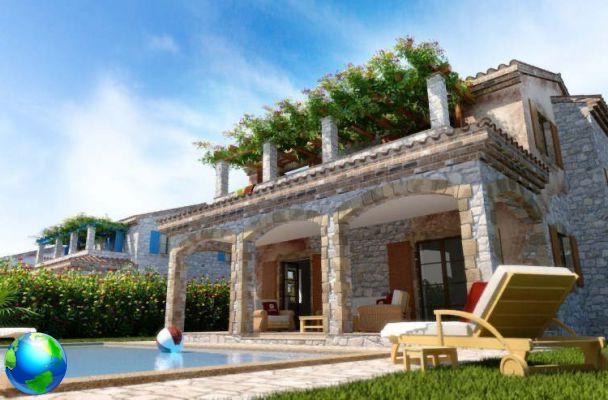 The choice in Bol is really wide: for all tastes and for all budgets. I booked the Bluesun Elaphusa Borac hotel, part of a chain with facilities in various locations in Croatia. It is a high end hotel Medium-High: a week in bed and breakfast treatment cost around 1.000 euros. Again it is certainly not among the cheapest hotels, but it does have a number of advantages that did not make me regret the shopping: a spacious, very clean room, with a large terrace overlooking the sea; there private beach with use of deck chairs, umbrellas and beach towels; there SPA with free access to the relaxation area and whirlpool and treatments at very low prices (scrubs and massages at around 20 euros); two swimming pools, including one uncovered and one covered; lessons of water aerobics, yoga e pilates at different times of the day. 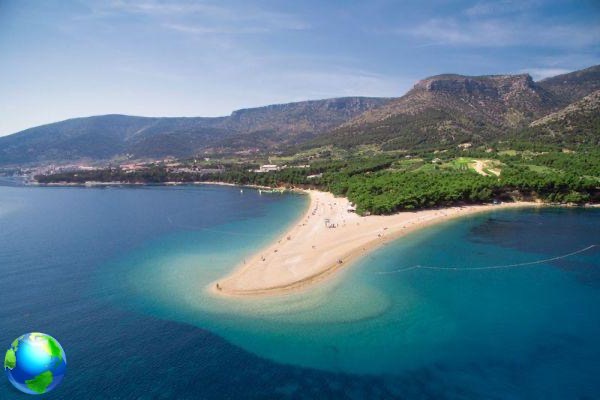 However, there is no lack of hotel facilities that allow you to keep costs down a little: both the center of Bol and the seafront offer a wide choice not only of hotels but also of apartments and starting from 30 euros per night: they can be viewed and booked directly through the official website of the Tourist Board of Brač.

Lovers of good food will not be disappointed: at every corner there is a konoba - the equivalent of our taverns - where you can eat dishes from the Croatian tradition with an average cost that does not exceed 20 euros. We have divided our dinners into three places: the first is the Plaza Borak, a stone's throw from the hotel. The highlight is the location on the sea: you eat on the beach by candlelight, savoring grilled calamari and monkfish served with baked potatoes. Another restaurant is located in the center of Bol, in the street behind the marina: Konoba Dalmatino it is a small room with a few wooden tables set up against the wall, along a pedestrian street. Excellent platter of pršut i sir, smoked ham and sheep's cheese, both produced on the island. For those who want to walk, it is worthwhile to walk the two kilometers that separate Bol from Mali Raj, which in Croatian means "little paradise". And in fact this place with the tables arranged in the garden, among olive trees and vases of lavender and rosemary is truly heavenly. The menu is not far behind, with an excellent offer of dishes from the Dalmatian cuisine: in addition to the classic appetizers such as ham and cheese, you cannot miss the peka, a sort of stew of vegetables, meat and aromatic herbs: everything is cooked in a wood oven in an ispod čripnje, a container similar in shape to that of a dome. 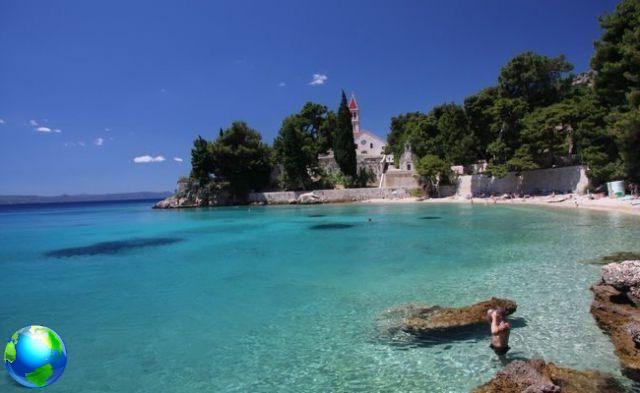 The countless kiosks along the promenade or on the beach they are excellent for lunch: they sell fruit salads, smoothies, sandwiches and drinks for a few euros.

Who likes to spend the day in beach is in the right place: the coast it stretches for kilometers, with both public and private beaches (ie hotels overlooking the sea). A little less than two kilometers from Bol is the famous Zlatni Rat, the 300-meter beach which occupies the most spectacular promontory in Croatia. The strip of land surrounding the pine forest has the particularity of changing shape and color according to the tides and currents. Sports enthusiasts can take lessons windsurf or water ski in one of the many schools on the beach.

In the evening, before dinner, a walk along the streets of Bol is a must. It is a small town, but it is one of the oldest centers on the island. The cobbled streets and houses are characterized by the typical white-sand color, the same as the Dominican monastery of Bol, dating back to the XNUMXth century. Several workshops where to buy local cheeses and meats. 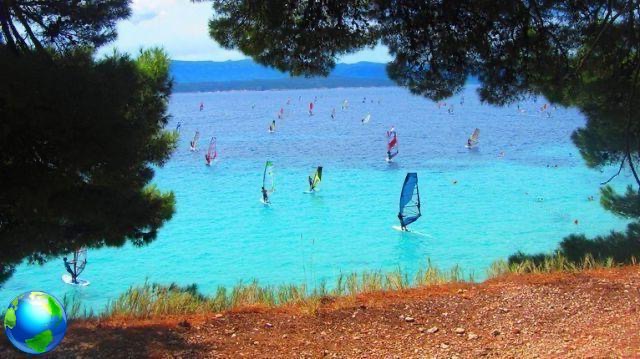 Upon returning, the walk that runs along the sea is a succession of stalls selling a bit of everything: from the ubiquitous imitations of bags and belts of international brands, to beach equipment. If you pay attention, however, it will not be difficult to find at least three or four stalls selling local handicrafts, including bracelets and necklaces in olive wood, or soap with olive oil.

The island of Lokrum in Dubrovnik, paradise on earth

Vis and Komiza: what to see in the islands of Croatia

Weekend in Zagreb, what to see in 2 days

In Croatia in Rab: experience the island for a week for 300 €

What to eat in Dubrovnik, the typical foods

add a comment from Croatia, vacation on the island of Brač