Cathedral of Santa Maria del Fiore Florence, why visit it 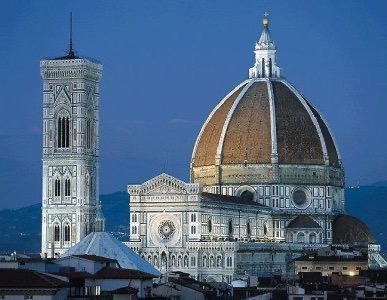 La Cathedral di Santa Maria del Fiore it is also known as the Florence Cathedral admired and photographed as one of the symbols of the city not only by tourists but also by locals who love this place and really consider it part and representative of the city of Florence.

In 1971 this church was the fifth largest in Europe, 153 meters long with a dome 92 Florentine arms wide. The church has a peculiar plan, composed of three naves welded to a huge rotunda that supports the immense Brunelleschi's Dome, the largest masonry dome ever built. The construction, begun in 1296 by Arnolfo di Cambio, was continued by Giotto starting from 1334 until his death in 1337. In 1412 the new cathedral was dedicated to Santa Maria del Fiore, and consecrated on March 25, 1436 at the end of the work on Brunelleschi's dome.

Il Duomo It is open from 10 to 17 from July to September, from May to October from 10 to 16 and from January to April and from November to December from 10 to 16.30. Saturdays from 10am to 16.45pm and Sundays and religious holidays from 13.30pm to 16.45pm. Other specific times are reserved for Christmas and Easter holidays, while the closures are on New Year's Eve, Epiphany and Easter. The entrance is from the left door of the facade and theadmission is free.

La Dome it is open from Monday to Friday from 8.30 to 19 and on Saturdays from 8.30 to 17.40, access is allowed up to 40 minutes before closing. The cost of entry € 8, with multiple ticket Dome plus Museum of € 11, multiple ticket Cupola plus S. Reparata plus Bell Tower plus Baptistery plus Museum € 23. There are no reductions and the climb on foot is 463 steps there is no elevator.

Further detailed information can be found on the website of the Cathedral of Santa Maria del Fiore.

Audio Video Cathedral of Santa Maria del Fiore Florence, why visit it
Girl in Florence, the interview of an American in Florence ❯

add a comment of Cathedral of Santa Maria del Fiore Florence, why visit it