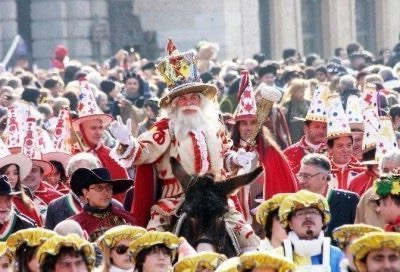 Il Veronese carnival it is probably the oldest in Europe. It dates back to the late Middle Ages, it has its roots in the time of Tomaso Vico, a XNUMXth-century Veronese doctor who left as a testament the funds to distribute annually to the poor population of the district of San Zeno (where the Basilica of the same name is located) food for sustenance on the day of the Friday before Lent.

In fact, in previous years, due to the devastating floods of the Adige (1520-1531) and the incursions of Charles V's Lanzichenecchi, the city of Verona was reduced to an unprecedented famine. Given the circumstances and the precariousness in finding raw materials, the "pistors”(Bakers) were forced to block the production of bread.

This led the population to arise, it was June 18, 1531, and just in San Zeno the people attacked the bakers. The general revolt was averted thanks to the intervention of some citizens, who at their own expense decided to contribute to refreshment of the poorest inhabitants of the neighborhood, including Da Vico, who was referred to as the “instructor and restorer” of the “Baccanale del Gnocco”.

In fact, since then the Friday before Lent takes the name of "friday gnocolar”And the Veronese carnival is led by the allegorical figure of the Papà del Gnoco, who is elected every year. Friday gnocolar is very much felt at Verona, the schools are closed and during the day a large procession of allegorical floats parades from the city to San Zeno, while in the square in front of the Basilica of San Zeno, the gnocchi with tomato sauce (a recipe that on this day you will find in every single restaurant in the city.

add a comment of Carnival in Verona: Friday Gnocolar