Canary Islands: which to choose?

When, in November 2020, I bought the flight to escape to the Canaries and work in smartworking from there I was not yet sure where I would go, or for how long. Contrary to what I usually do (I love planning and learning more), I went for Fuerteventura  with the idea of ​​visiting this island and its neighbor Lanzarote, and then decide at a later time where to go next. In the end I stayed on the Canary Islands for 4 months and visited 7 out of 8; I miss her Gran Canaria, but I have also recovered a lot of info on this island from several friends who have lived there for quite a while. I have decided that I will dedicate another trip to Gran Canaria the next time I return to the Canaries.

In general I can tell you that the Canary Islands were a really big surprise for me!! Having the opportunity to visit them in this historical moment was absolutely a plus, especially as regards the south of Tenerife, normally besieged by mass English tourism. I can't explain why they are mistreated and considered uninteresting to visit !! I think many associate them only with surfing in Fuerteventura and Lanzarote or with the beaches and nightlife of Tenerife and Gran Canaria, but there is much, much more !! Although belonging to the same archipelago, the Canary Islands are profoundly different from each other and offer a lot for everyone: they range from the desert landscapes of Lanzarote and Fuerteventura, to the high mountains of Tenerife or La Palma, from the woods of La Gomera to the rainforest of La Palma, from the architecture of Manrique in Lanzarote to the colonial cities of Tenerife. Everyone can find the Canary Island that suits them best, you just need to get information and choose well. And here I come to your aid! I guess most of you won't have 4 months to visit all the Canary Islands, but only a week or two, so you will necessarily have to choose which islands to go to. 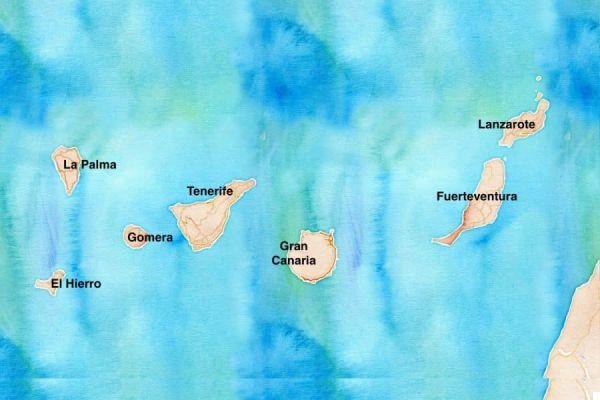 Canary Islands, which ones to choose based on what you like

To schematize, I have summarized in this table some characteristics of each island of the Canary Islands to help you in your choice. Then I will describe their characteristics better. 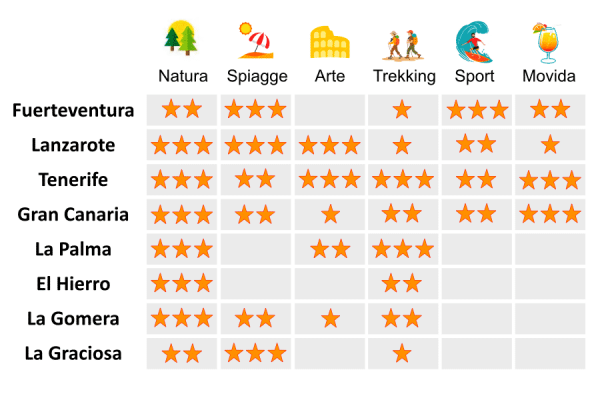 How to get to the Canary Islands: direct flights

One reason for choosing an island in the Canary Islands rather than another may be the fact that you can reach it with a direct flight from Spain, especially if you do not have many days available.

The Canary Islands that have direct flights from Spain there are 4 and they are: Fuerteventura, Lanzarote, Tenerife (South) and Gran Canaria. The 4 largest islands of the archipelago can be reached in 4 hours by flight from various locations and others depending on the season) by different companies such as Ryanair, Easyjet, Neos and Wizzair. To reach then La Palma, El Hierro o La Gomera you will have to take a domestic flight or a ferry (as is the case with La Graciosa). 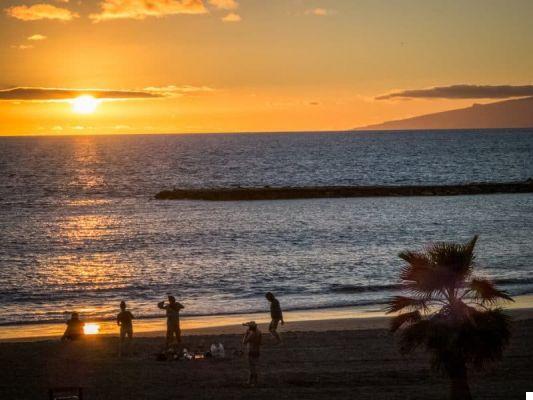 How to move between the Canary Islands

All the islands of the archipelago have an airport (except La Graciosa, which is tiny - Tenerife has 2 instead) and the plane is certainly the most convenient way (often also the cheapest one) to move between the islands that are not nearby. between them. If you buy the ticket in advance you can also find tickets for 20 euros / way! Keep in mind that on the island of Tenerife domestic flights normally depart / arrive atTenerife North airport, while international flights on that of Tenerife South. The companies that operate internal flights are:

All the Canary Islands are connected to each other by ferries or hydrofoils thanks to the companies  Naviera Armas  e Fred Olsen . Be careful when buying your ticket online because the first rate it shows you is usually the one for residents (who have a 75% discount!). For non-residents the ferries are very expensive, often more expensive than planes! If you want to save money, however, you can consider taking night ferries, when they exist, which take longer but cost less. The routes in which it is certainly convenient to move by ferry are the shortest ones, therefore: 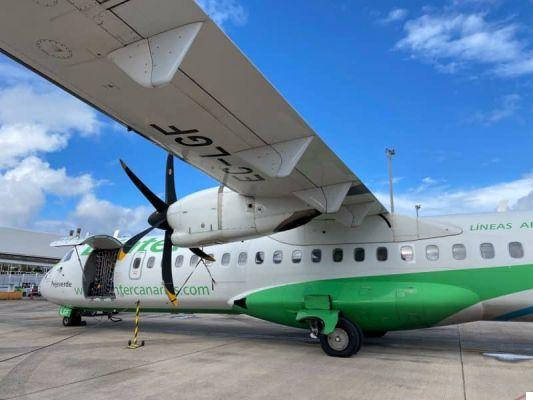 Canary Islands: where to go

Before looking at the characteristics of the various islands in more detail, there is one that applies to all of them, that is nature, the wild and majestic one. All 8 islands offer breathtaking landscapes at a naturalistic level, desert and arid in the case of Fuerteventura, Lanzarote and La Graciosa, greener and mountainous in the case of all the others. Tenerife, Gran Canaria, La Gomera and La Palma then, in particular, have one variety of ecosystems that you will rarely see elsewhere on such small surfaces. An example above all is Tenerife, where you can pass in less than 1 hour from the beaches to the snow on the summit of Teide volcano, the highest mountain in Spain (3718 meters). From the naturalistic point of view, no island can really disappoint you. As for other characteristics, however, there are substantial differences that will allow you to choose an island of the Canary Islands rather than another based on what you are looking for. Let's go and see them together:

If you like the sea, beaches and surfing / windsurfing

I believe that in the imagination of many (or rather of the few who have an imagination about the Canaries!), The Canary Islands are islands where you go to devote yourself to beach life and the sea in every month of the year and, at the most, to indulge in some water sports such as surfing or wind / kitesurfing. Ordunque, this statement is certainly true but it is particularly true for Fuerteventura, For Lanzarote and for La Graciosa. These 3 islands have by far the most beautiful beaches, those with fine white sand, and crystal clear sea water. At the same time, however, these 3 islands (close to each other) are also the ones most exposed to winds, especially the trade winds that blow from the north, and this makes them perfect for surfing, windsurfing and kitesurfing. The spots to practice them are many and, according to the experts, also very beautiful. If you don't practice these sports, however, take into account that the wind could bother you, especially in summer, when it blows stronger. 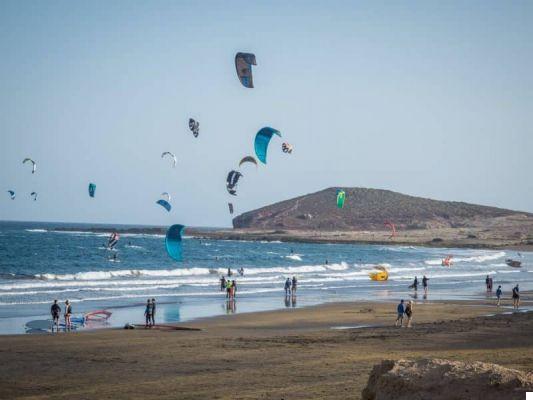 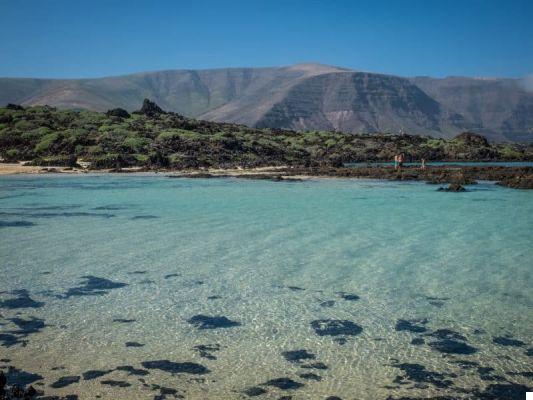 The thing that probably surprised me the most about the Canary Islands is the great quantity and quality of the treks that can be done. All the islands have dozens of well-marked trails of all lengths and difficulties. If you love walking, the Canary Islands to choose from are definitely Tenerife, La Palma, La Gomera, Gran Canaria e El Hierro. Tenerife and La Palma, in my opinion, have the most beautiful treks in the archipelago, often the longest but also the most scenic, such as the Route of Volcanoes (La Palma)the la salita sul Teide (Tenerife), but El Hierro, Gran Canaria and La Gomera are defending well. The tourism dedicated to trekking is very relevant and very developed on the islands and you can easily find a lot of information in the Visitor Centers or on the web, on the sites of the different islands. If you are looking for more detailed information you can read the article I wrote on the most beautiful treks in La Palma (and the one on the most beautiful treks in Tenerife will also arrive). 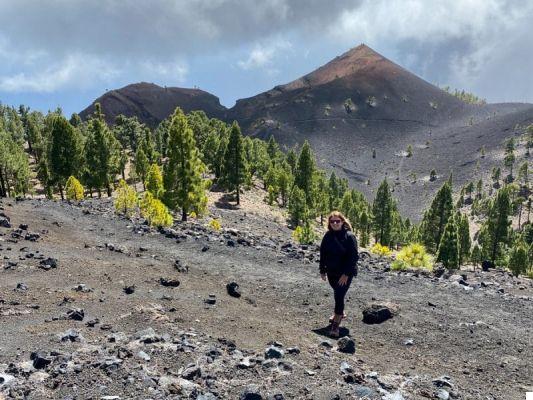 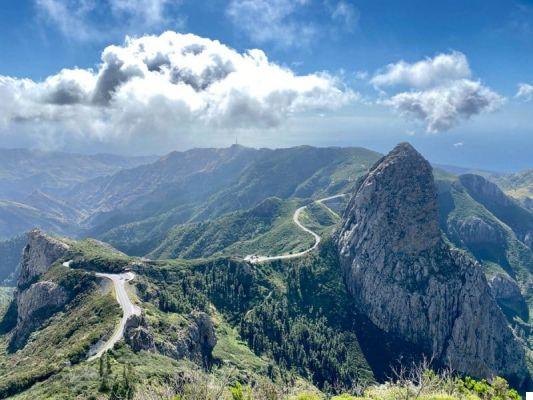 If you love art and architecture

If on a trip you are also looking for beautiful architecture and a bit of culture, the Canary Islands to choose from are Lanzarote, Tenerife, Gran Canaria e La Palma. Lanzarote can in fact be considered a gigantic work of art thanks to the inspiration and creativity of César Manrique. This artist, originally from the island, saved her from the fate that fell to the other islands (see the eco monsters and a hideous building found on all the other islands to varying degrees). We owe to him the regulation that prevented building speculation and the uncontrolled development of Lanzarote, as well as the magnificent design of some streets, a hotel, a villa and 7 truly incredible art centers such as the Mirador del Rio, the Jardin de Cactus, the Jameos del Agua, the Cueva de los Verdes. If you are an aesthetes (like myself), Lanzarote is your island! If, on the other hand, you are looking for beautiful historic, colonial cities, you will find the most beautiful in Tenerife (and I'm San Cristobal de la Laguna, La Orotava and Puerto de la Cruz) it's at La Palma (Santa Cruz de La Palma it is perhaps the city that I have found most beautiful among all the islands). Also Gran Canaria has some very nice historic towns, like Aguimes for example. 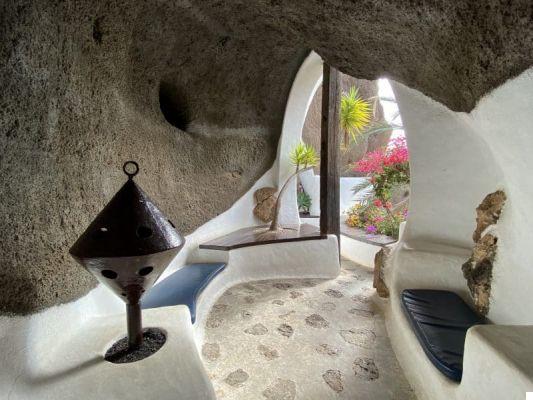 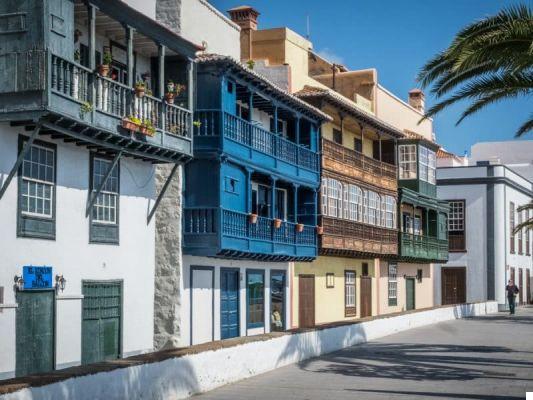 If you don't want to give up the nightlife

Which Canary Islands to choose if you don't want to give up the nightlife on your trip? For sure I would tell you Tenerife (especially the south, the Los Cristianos / Las Americas area), Gran Canaria (both the south and the capital Las Palmas) is For/ fuerteventura-what-to-see /teventura (north, Corralejo). While in the south of Tenerife and Gran Canaria you will find large clubs and discos (especially suitable for an English audience), in Fuerteventura the nightlife is more linked to the surfing environment. 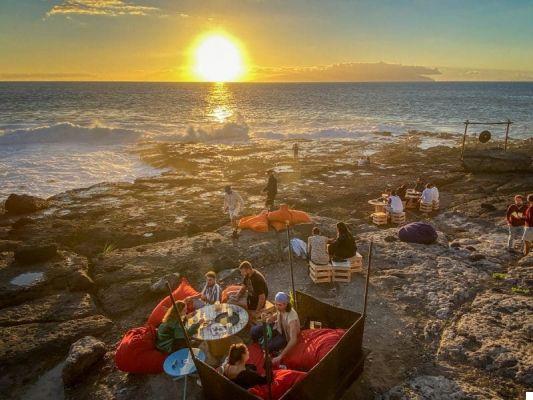 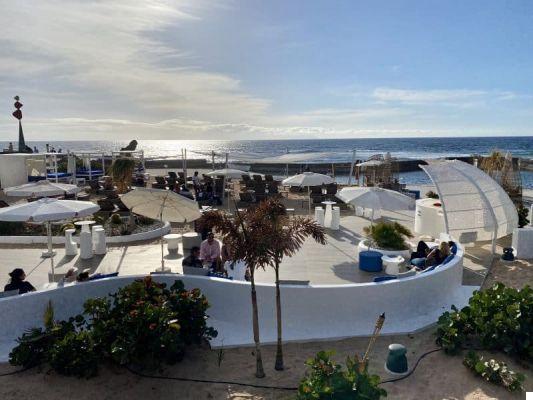 Itineraries for the Canary Islands

If you have 1 week

If you have 1 week available, my advice is to dedicate it exclusively to exploring a single island. Choose the one that inspires you the most and visit it well, also allowing yourself the right relaxation.

If you have 2 weeks or more

If you have 2 weeks or more available, depending on the things you are most interested in and the proximity between the islands, you can evaluate one of these itineraries: 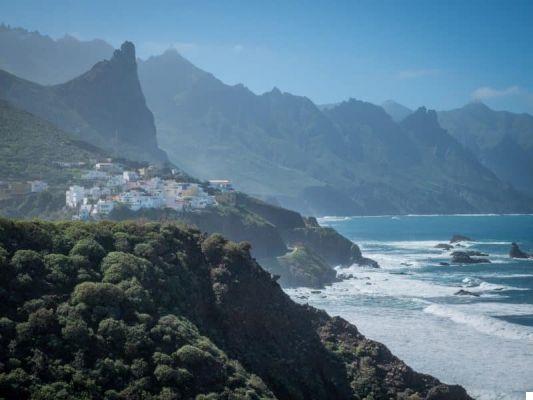 add a comment of Canary Islands: which to choose?