Borderline Artists between normality and madness, on show in Ravenna 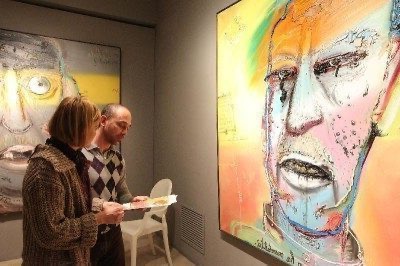 It opened on Saturday 16 February Borderline Artists between normality and madness. From Bosch to Dalì, from art brut to basquiat. The exhibition will be hosted in the halls of Art Museum of the City of Ravenna (MAR) until June 16, 2013.

Curated by Claudio Spadoni (director of MAR) and Giorgio Bedoni (psychiatrist and psychotherapist), with the support of the Cassa di Risparmio di Ravenna Foundation and the Mazzotta Foundation of Milan, the exhibition intends to investigate from an anthropological point of view (even before purely artistic) the border between "normality" and "madness" in the painting of the first mid-twentieth century, a theme on which various "borderline" artists have ventured.

Focusing on the clinical dimension of art, which refers to sanatoriums for the mentally ill of the late nineteenth-early twentieth century, the exhibition is divided into two sections: after an insight into ante-litteram introspective art (Bosch, Bruegel, Géricault, Goya, etc. .), forerunner of the twentieth-century "alienations", we arrive at the contemporary core and its subsections (discomfort of reality, discomfort of the body, portraits of the soul, oneiric dimension as authentic reality), within which, among the many, works by Dalì, Ernst, Brauner, Masson, Bacon, Dubuffet, Basquiat, Tancredi, Moreni, De Pisis. Self the label of "Art Brut", coined in 1945 by Jean Dubuffet, is the leitmotif of the exhibition, we also note the presence of some works by Paul Klee, who in 1912, on the occasion of the first Blau Reiter exhibition, had definitively baptized "illness" as a force propulsive of making art, generator of a naive, “childish”, therefore pure style.

From 1 April, the exhibition will resume evening openings on Fridays (until 21 pm): upon reservation, it will be possible to combine an aperitif + guided tour (from 19 pm), for a total price of 14 Euros

Audio Video Borderline Artists between normality and madness, on show in Ravenna
Turin city of books: all the places for reading ❯

add a comment of Borderline Artists between normality and madness, on show in Ravenna