Belgium, a mini guide to get to know its cities 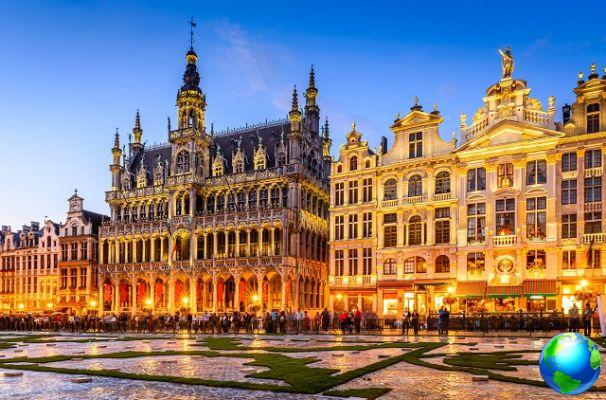 Belgium it's a small state, easy to get around in a few days… but it is very windy! So cover up well if you want to visit it in mild seasons. Its cities are like the pralines of which this state is a great producer: all of them contain a wonderful heart. A few kilometers away from the capital, Brussels, there are several really noteworthy centers; I have visited some of them: here are my tips.

You can't miss visiting the capital of Belgium and the city of Europe! Here, in fact, the European quarter is located, with two of the three main EU institutions, the European Commission and the Council of the European Union, as well as the Parlamentarium. As I pay for my waffle with a 5 Euro note, I can't help but reflect on how comfortable it is to live in the EU.
Also the Grand Place leaves you speechless while the famous Manneken Pis, national symbol, it makes me smile: I remembered it a little older! Not even this time I found him dressed: on some occasions, in fact, a woman named Jeanine dresses him up. The collection of this funny little man's clothes is kept at the City Museum.
For a delicious and cheap bite, go to Le Brueghel, a tavern near the central station: you will find many local dishes at a fixed price. I recommend the classic meatballs with red sauce, a delight, obviously with the inevitable French fries! For the after dinner, however, a stop from is a must Delirium: the variety of beers that are tapped here is exceptional! To taste more and not crawl out of it, there is the ingenious formula of the birrino: with 2 € you can taste a glass of beer. If you're lucky, you'll also see a concert downstairs, which often hosts live music.

Looking for a guide on the city of Brussels, read the mini low cost guide to Brussels.

This university town it has a wonderful town hall, overlooking the main square: every day at 15pm an inexpensive guided tour will allow you to see it from inside as well. Do not miss the "longest bar in Europe”: In fact, more than 35 local, side by side, creating a huge bar along the square. Perfect for a pub crawl! Kotmadam sits comfortably in the middle of the square: she who once took care of off-site students, giving them a home and a shoulder to cry on for their unsuccessful exams. His statue is a reminder of this Belgian tradition with a university flavor. Various statues are scattered around the city, each with its own story: students visiting Leuven will have to pay homage to the monument of Erasmus… As the locals say, small statues for great personalities!
Another gem is the Beguinage: a UNESCO heritage site since 1998, it is a village in the city, where once the Beguines, religious women who united in female communities. Today university professors and students reside there.
Before visiting Leuven, plan a brunch at Le Pain Quotidien: all their products are organic and delicious! And before you leave, try the beer too Stella Artois, produced right in this city by the centuries-old brewery of the same name.

If you want one low cost mini guide for 3 days in Leuven, read here.

Called the "Venise du Nord”Probably for the similar history and for the insistent hiking, this town is a medieval jewel. Those who have recently seen the film Monuments Men, but also those who have not, will be amazed in front of Michelangelo's "Madonna and Child": the statue is kept in the church of Our Lady. On the main square there is Belfort, nicknamed Belfry, the civic tower of the thirteenth century that contains a carillon consisting of 47 bells.
Also in Bruges is the UNESCO-protected Begijnhof, with 30 white houses that once housed the Beguines and which now house Benedictine nuns.
Walking between bridges and canals you can reach the river, along which some windmills stand: the view over the city from here is special.

The center of the town of Gent can be reached by climbing from the central station along streets embellished with various graffiti. On Werregarenstraat, Also called street graffiti, it is allowed to use the spray on the walls. If you are a graffiti artist, this is the place for you!
in the center, among the medieval streets, there are several churches, the cathedral and the control tower, called Belfort. The 2010th century castle has been a court, a prison, even a cotton factory over the years. Pay attention to the street lamps in front of the castle: perhaps you will be able to see them illuminated for a moment even in broad daylight. It is an artistic installation that has remained from XNUMX, when Ghent hosted the first edition of the event "City of light”, And lights up every time a child is born, being connected to all the maternity wards in the area.

The city, which vies with Amsterdam for the title for the largest number of different nationalities, has a long history, starting with its name. Antwerpen would derive from the phrase Hand werpen, meaning "throw your hand“, To remember the gesture of a brave Roman soldier who cut off the hand of the giant ruling the area and threw it into the river. The fountain with the hero statue is located in the Grote Markt square.
You fall in love with the city as soon as you arrive at its station: it is one of the most beautiful stations in the world, seeing is believing. The center is full of large squares and splendid monuments: the Cathedral of Our Lady, the ancient Church of San Carlo Borromeo, the Grote Markt with the town hall (Stadhuis) decorated with the flags of all states.
Along the Schelde River rises the city ​​castle: at the entrance there is the statue of the famous giant. A little further on, the port of Antwerp also houses a modern museum, with stained glass windows that allow a 360 ° view of the city. Up to the age of 26 at the MAS (Museum Aan den Stroom), but also in numerous other museums in the city such as the Rubens House and the Brueghel Museum, admission costs only € 1. Next to the museum, the Welton Wervaert floats on the water, a bar born as a sustainable art project and made entirely with recycled materials. Try a craft beer or organic apple juice on their funny terraces: relaxation guaranteed!
There are no bridges that cross the river, but to go to the other side you can use the Sant'Anna tunnel: thanks to the old (but working!) wooden escalators you go down 31 meters under the river and go through the entire tunnel. On the other side, a wonderful view of the city awaits you.

Audio Video Belgium, a mini guide to get to know its cities
Tiramisu recipe, the tastiest dessert in Italy ❯

Sleeping in Brussels in a former brothel: Hotel Le Berger

Fly to Brussels, the Smurfs turn 50

add a comment of Belgium, a mini guide to get to know its cities