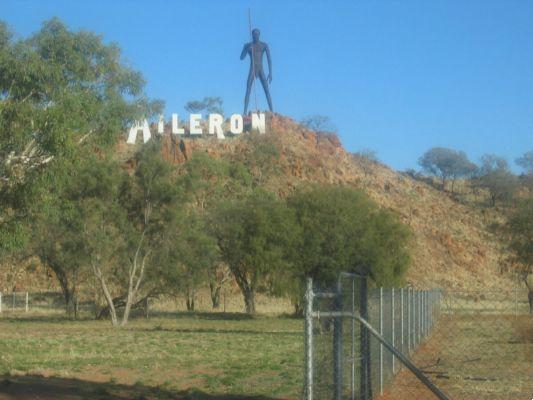 Ailleron it is a petrol station with a motel behind it, it does not have internet, on the other hand there is a beautiful bright red English telephone booth on the outside square, near which the representations of two “sirens of the desert”, or nice lizards, are stationed.

The motel is made up of a set of prefabricated houses.

Behind the buildings, a very high hill on which stands the statue of an aboriginal warrior and the inscription Ailleron that stands out in the sky.

All around, silence, interrupted only by the screech of birds.

The motel is run by two twins (they will make a joke of looking the same person) and their father, a nice old man who loves showing his dentures to children, pulling them out with his tongue.

The motel is spartan but offers us a good dinner, finally Australian cuisine, and a great breakfast.

In the evening we play billiards while in the background a large plasma TV is broadcasting the local version of “Dancing under the stars”, and that's when you wonder who made you cross the world. 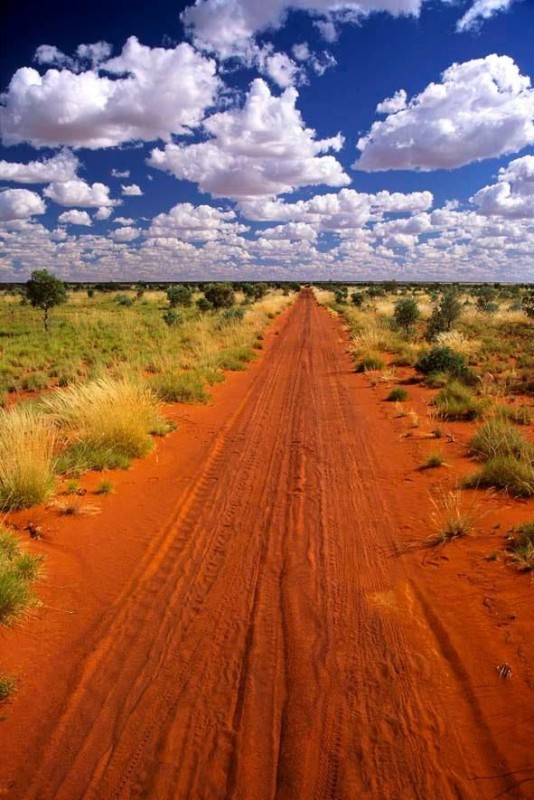 My first experience with the laundries of the Rodhouse is disheartening, water everywhere and programs that do not proceed, but in short, it is only a beginning.

In the morning we wake up at dawn, crisp air, compared to Melbourne the temperature is quite similar, even here it is cold with a decidedly dry climate, and not humid.

There is a lot of temperature difference between day and night, but according to the twins, this year has never really been cold.

After refueling, we begin the journey to Tennant Creek, 368 KM, and we also begin to meet the mythical, mammoth TIRs.

During the trip, the landscape is quite monotonous, clearing and bushes typical of the bush, even the sky does not give me that wide breath that I had found in the South African sky, it is certainly a matter of visibility and climate.

Obviously this is a land that enters your blood little by little, the landscape is assimilated in its apparent immobility, in reality it is a becoming that we will realize along the way.

The route is interrupted approximately every hundred kilometers by reassuring service stations / roadhouses. 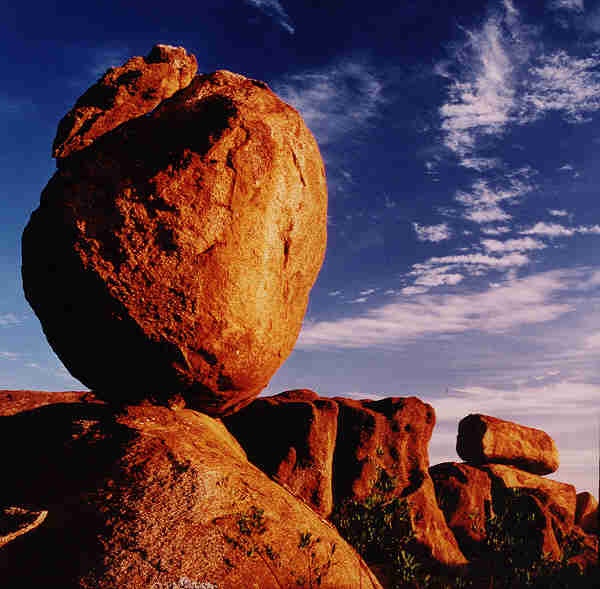 The first we meet is that of Ti Tree (like the famous oil), advertised as the most central pub in theAustralia, quite poor and dirty.

The owner is unspeakably ugly, narrow and long face, low front, unwelcoming .. at the back of the place there are aboriginal paintings hanging on the walls, a large enough collection because they are produced right here, together with the tiles and the inevitable boomerangs.

The climate is still very cool, people are dressed in the most varied way, padded jackets over shorts, or long trousers and hats, almost all with the inevitable Australian slippers on their feet.

The next stop is Barrow Creek, one of the "ancient" (second half '800) outposts of the telegraph.

This road house it is very beautiful, there are bucanville, outdoor tables, a Christmas tree inside, a lounge full of memories of the patrons, walls covered with coins from all over the world, the owner shows us all the Spanish objects, old lira , identity cards torn .. I leave him a ticket for the Rome Metro. 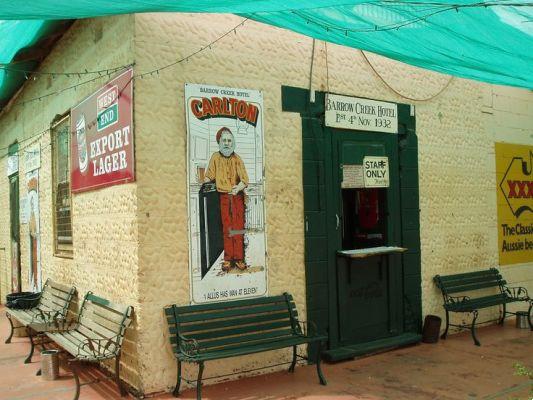 L’aria a Barrow Creek it is beautiful, the temperature has risen, it seems to be in the mountains on one of the beautiful summer days.

At lunchtime we arrive at Wycliffe Well the site populated by extra-terrestrials.

Arriving here, the impression is that of the mania for UFO is authentic, certainly also used as a tourist attraction, but the collection of articles, the place itself, in its solitude, inspires the idea of ​​a passion for these themes. 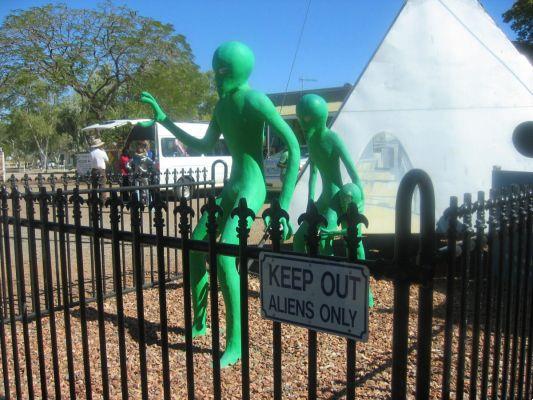 Here we ate Barramundi, the only fish present in the Australian seas and rivers, apparently, since I will find only this type of fish in the various menus, and an excellent grilled chicken. 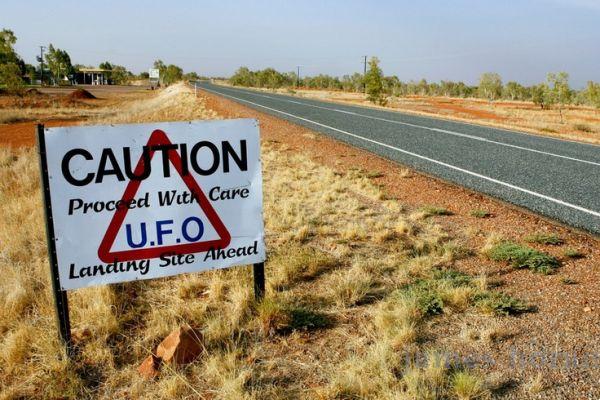 In the afternoon, en route to Devil Merbles, where we arrive around 15.

This is certainly not the best time to see them, yet the charm of this place is strong.

The boulders, from the largest, at the top, gradually to the smallest, at the base, are the result of soil erosion, not accumulation.

The granite disappeared following the erosion of the soil and the pressure of the surface on the underlying sand layer, creating cracks in the valleys where the water flowed and flowed, shaping the underlying granite up to the current circular shapes. 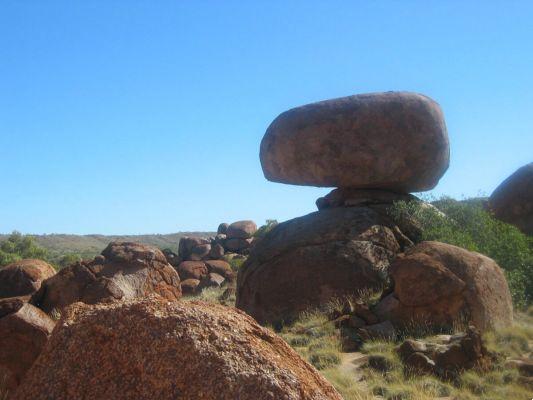 The site is suggestive, it would be nice to stop until sunset but we are attacked by flies, the heat is strong.

Various are standing on the clearing "traveling houses”, People are dedicated to arranging ropes and ropes, to pitch tents, on top of many jeeps there are also several petrol cans.

Others, on the other hand, simply wait.

It is not difficult to imagine the ancient tales carried by the wind of the peoples who lived thousands of years ago on this territory.

The rocks, so soft and imposing, do not seem to be there by chance, the same feeling that the termite mounds give me, which in this area are already starting to be more numerous and taller, and seem to follow a hidden and undeciphered code.

This is one of the sacred places of the aborigines, here are set some of the most important dreams, handed down from father to son, here they come to collect the rainwater that forms in the cracks and that they consider sacred.

Here no Aboriginal people are seen, only white people camping out with their means.

In any case this ours tour in Australia he is very handsome.

Interview with the Italian who will do the best job in the world, we hope