Ascoli Piceno: 5 stages in the city of a hundred towers

Ascoli Piceno: a post full of tips to admire its glorious past, made up of towers, bell towers and pinnacles. Are you ready to go?

Surely not many know it, but in Italy there is a city that has boasted this name over time: the city of a hundred towers.
What city are we talking about? Ascoli Piceno. 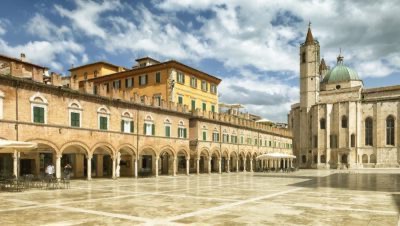 Even today, admiring the panorama, you can contemplate the remains of this glorious past, made up of towers, bell towers and pinnacles.
Its characteristic is that of being enclosed - indeed embraced - by a stream, the Spanish, and a river, the Tronto. 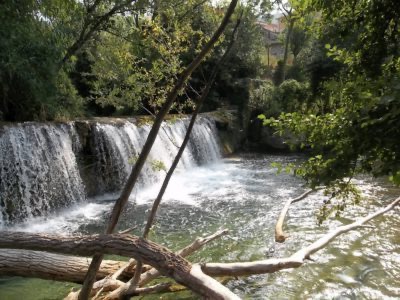 The origins of Ascoli Piceno

The origins of the city are actually still the subject of fervent debate today, what we know is that its foundation dates back first to the Piceni - indigenous population of the area - and then to the Romans who in 299 BC attracted it to their orbit.

But Ascoli Piceno is actually also the city of travertine.

In fact, there are numerous quarries located nearby from which the blocks for the construction of the Old Town.

Ascoli Piceno also boasts one of the most beautiful squares in Italy in which several commercials and films were also shot.

What to visit in Ascoli Piceno

But let's come to us, what to visit in Ascoli Piceno and surroundings?

We talked about the good living room of Ascoli, or the Piazza del Popolo. 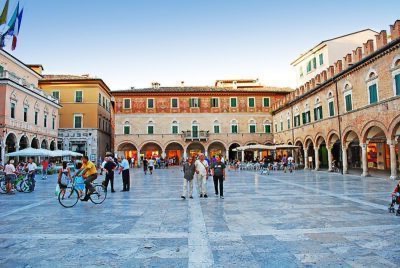 This is where we can visit the Palace of the Capitani del Popolo. 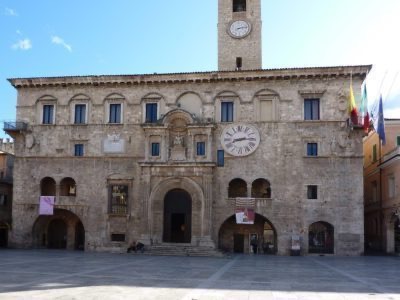 An architectural jewel with archaeological merits that has overcome, with changes over time, centuries of history.

In fact, the history of the city is also studied thanks to the stratification of eras.

Palaces, museums, cafes and churches are in fact built directly on the ashes and foundations of previous eras.

And here it is Roman, medieval and modern epochs follow one another.
The story studied vertically we could say.

Also in Piazza del Popolo we can admire the Gothic Basilica of San Francesco.

The first stone was in fact laid here in 1258 and construction continued, with numerous interventions, until 1549.

Towards the western side of the church we find two cloisters.
The main cloister, also called Piazza delle Erbe, and the minor cloister.
Both surrounded by arches, small columns and loggias, they offer a precious space to relax from the urban noise.


Always in the good living room we can enjoy a pleasant break at Meletti coffee.

Inserted in the 150 historic cafes of Italy, has seen writers and artists such as Hemingway, Mario Soldati e Guttuso as well as politicians such as Pertini e Saragat.

2. A specialty of Ascoli Piceno

Stopping here for a short stop, you cannot fail to taste the local specialty: theanisette with the fly.
A glass of anisette, anise-based liqueur, with a coffee bean.

Trilussa wrote: “How many fables and how many sonnets did meletti inspire me”.
Surely, getting carried away by the sweetness and beauty of the place, it is late and you have to leave for the streets of this city.

We then continue towards Piazza Arringo where we find the Civic Art Gallery, the State Archaeological Museum, the Diocesan Museum, the Cathedral of Sant'Emidio and the Baptistery of San Giovanni. 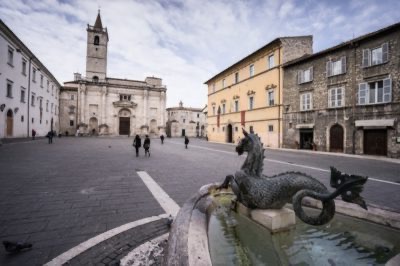 The picture gallery is located in a wing of the Town Hall and houses numerous works of art.
Inside we can find works by Titian, Tintoretto, Crivelli e Cola d'Amatrice.

These are just some of the numerous artists who find their place here.
Ticket prices vary from € 8 to € 5 depending on reductions or not.

Another museum that is located in this splendid square, which among other things also houses the very important one Mixed Fried review, and the Archaeological Museum.
The path inside the museum unfolds over three floors, each of which occupies a historical period.
It goes from the Paleolithic to the Bronze Age.


Here are preserved all the historical finds of the Piceni and Romans found in the city and in the surrounding areas.

After the picture gallery and the archaeological museum we can admire the Diocesan Museum.
Ticket prices vary from € 3,5 to € 2,5 depending on reductions.
Here, too, the ticket money is well invested to admire numerous paintings, frescoes, wooden sculptures and sacred silverware.

The tour ends in Piazza Arringo, la Cathedral of Sant'Emidio and Baptistery of San Giovanni.

The Cathedral is the result of numerous interventions that took place between the eighth and sixteenth centuries.
Most likely, following historical discoveries, the Cathedral rises right above the ancient Roman Forum.
Along with many paintings and works of art, inside there is the precious Polyptych of 1473 by Carlo Crivelli.

After the visit of the two squares with all their treasures we can head towards the Forte Malatesta.
Located not far from the two squares - but still in the plan of the old city - this fort was used for the defense of the city.

The current Fort dates back to 1540, designed and built by Sangallo the Younger on behalf of Pope Paul III.
Following a renovation, the Fort now houses a multipurpose museum center as well as the museum of the early Middle Ages.

In fact, the numerous artifacts found in Trosino Castle.
The finds consist of a complete set of necklaces, fibulae, buckles, amulets, jewels and even weapons, shields and helmets, all of them Lombard.

Tickets range from € 8 for the whole to € 5 for the reduced.
Certainly a certain time has come and hunger will have taken over.

What to taste in the city of a hundred towers?
Who among us does not know the queen of the territory?
The olive all'ascolana. 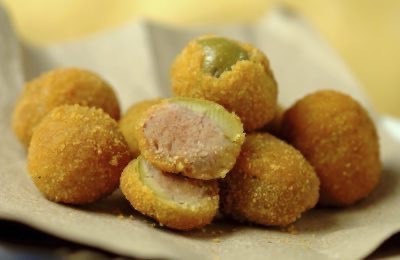 Without bumping into its recipe and its preparation, each of which has its own variant even if compliant with the DOP, we can stop in one of the delicious restaurants in the center to taste all the typical products and specialties of this territory that has nothing to envy, in theme of recipes, to other noble areas of Italy.

In fact, between Piazza Arringo and Piazza del Popolo there are numerous alleys that host small restaurants, trattorias and places where you can taste both the olive and the much-praised mixed fried all'ascolana.

There is a very convenient parking just below the historic center.
It's the parking lot Torricella.
With an hourly rate of 1 € or 10 € / day you could stop directly under Piazza Arringo.
A comfortable wooden bridge that crosses the Castellano and a comfortable lift will then take you directly to the good living room of Ascoli.

What to see around Ascoli Piceno?

Do you have little time but still want to treat yourself to a visit to the Piceno area?

Do not miss the visit of Castel Trosino, a splendid village perched on a travertine cliff.

It is protected behind by the Monte Piselli, a ski resort in winter and a destination for excursions for the remaining seasons.
Beyond the entrance arch to the town, it seems to immerse yourself in the past. 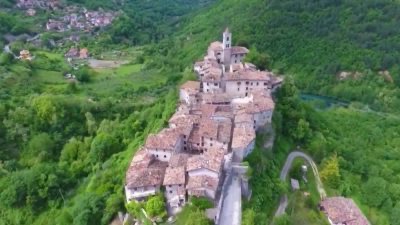 Stone houses, narrow alleys but above all a breathtaking view.
Inside the village there is a very nice little house, traditionally considered the home of King Manfrì, the illegitimate son of Frederick II.

Near this very characteristic small village there is the opportunity to visit the waterfalls of the Castellano stream and the Lombard necropolis.
There is in fact a small path that winds its way winding along the hills adjacent to Castel Trosino that leads, between streams and trees, to the necropolis.

Finally, some advice is a must.
Get lost in the streets of Ascoli.
This is the only way to best see and observe the treasures of this city.

add a comment of Ascoli Piceno: 5 stages in the city of a hundred towers