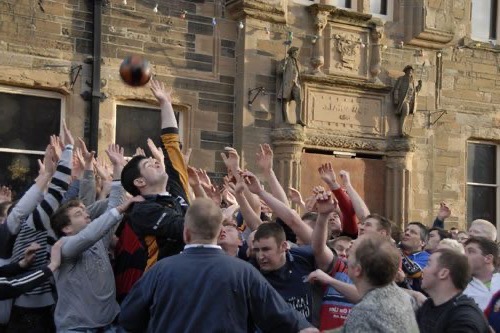 Every year on January XNUMXst in Scotland and precisely in the streets of Kirkwall is disputed on Ba '. The game is a great rugby in which the whole town, including visitors, plays. Here the game dates back to 1850 for its last rules but in reality it has a much longer history.

Le teams they are decided on the basis of the residence of the inhabitants. The aim of the game is in fact to bring the ball, as in rugby, from one side of the city to the other, the upstream side, up, or downstream, done.

For those arriving from outside the city, the choice of the team is not accidental, it depends on where you arrive, where you first set foot inside the city. For many years the Ba 'seemed to be disappearing like tradition from this town, but today it is more alive than ever and every year attracts many visitors who want to have fun and participate in the event.

In the early afternoon the ball is thrown and the game it will only end when someone takes it from one part of the city to the other. The tradition felt and still active today is not violent and much sportier than one might think. An excellent opportunity to pass by Christmas holidays fun in Scotland.

Audio Video A New Year's Eve in Scotland with the Ba 'of Kirkwall
Girocittà, visit the cities of Lombardy with Trenord ❯