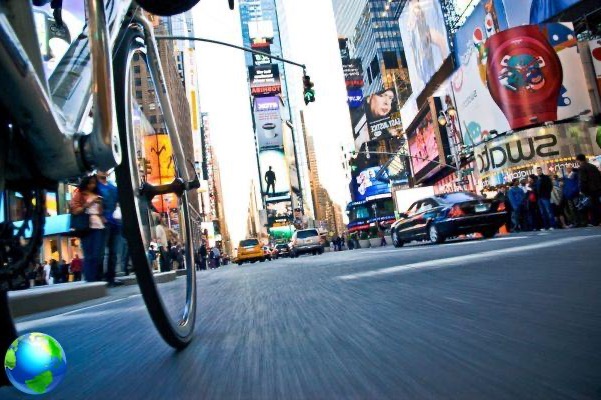 New York it is the city that never sleeps, the city where anything can happen, where dreams come true and a dream for many many people.

If you are organizing the trip by yourself, as I did, you may have some difficulties in understanding which documents and paperwork are necessary to be carried out before departure. On the internet there are a multitude of guides and travel diaries that explain it to you, but here are the main points, very useful, to know and to keep in mind for your travel organization.

The 6 things to know before leaving for New York:

1- Documents and the Electronic System for Travel Authorization (ESTA):
What documents to bring to New York? The necessary documents are simply two. The first is the Passport valid for the United States, what you have to do (for those who do not have it, at the Passport office of the Police Headquarters of your city. I paid a total of 86 euros, including passport, passport photos (4 of special size) and revenue stamps necessary (at the office you will receive all the information).
And then the ESTA, the visa required to enter and remain in the United States for business or travel purposes for up to 90 days. The visa must be done online on the Italian website of the ESTA, at the price of 14,95 euros per person (this was the price of two years ago). The visa must also be kept for when you leave the United States, you will be double checked so do not lose it.

2 - Customs Regulations:
At the Customs entrance (at the airport), it is forbidden to bring all those objects that are forbidden to bring on board the plane (liquids, sharp objects, etc.), so before leaving and after booking the flight, read the company regulations carefully plane you are traveling with.
Furthermore, once you land in the United States you will have to do some checks. You will be given a questionnaire to fill out in which you will have to declare which objects (especially electronic ones) you are carrying with you in the suitcase. This is a somewhat delicate point. Some people declare everything they have in their suitcase, many others don't. I personally have not declared anything and nothing has happened, now almost no one declares their camera or other personal items, but if you want to rest assured declare the most important items you have in your suitcase.
Upon leaving the United States, you will be asked the same question again and on purchases made in New York that you are taking home, you will be charged taxes (in addition to those paid at the time of purchase). For this reason I preferred not to declare anything, but the choice is yours. I believe that these checks are now only pro forma that they have to do at the airport but do not be afraid. Both on the way out and on the way back, it was rare to see someone making a statement.
Secondly, it is forbidden to bring fresh food to the United States, and if you have cash in excess of $ 10, you must declare them.

3 - Currency Exchange:
The US currency is the dollar. Before leaving I wanted to try to change some money both in my Italian bank, and later, once I landed in New York, at the JFK airport. I advise against this choice as they made me pay a high interest rate. The best choice is to change them on the spot. The office where I have always found the most favorable change and where I recommend you change them is  the central exchange office in Time Square.
It is very large, with different staff and there are changing them with a lower interest rate.

4 - Electricity:
The American voltage is 110 Volts and the electrical outlets are different from the Italian ones. You can buy American sockets in Italy, before leaving, at any point of sale of electrical equipment or directly in New York at any souvenir shop at a very affordable price (from 1 up to a maximum of 3 dollars)

5 - Language:
in New York we speak mainly English, but being a multi-ethnic city you will find lots of people speaking Spanish and also Italian. in New York there are many Italians and it is easy to find Americans chewing a little Italian. If you don't know English very well don't worry, you will certainly be able to make yourself understood.
Furthermore, the Americans are a very courteous people, every time you enter a shop as well as greet you immediately (which is now unusual in Italy) they will ask you "How are you?" or "How are you?", a typical phrase that you will hear repeated very very often.


New York is a very big city and in my opinion you have to go around it using the subway, especially if you also shoot outside of Manhattan. So when you leave the airport I recommend that you get a metro pass.
Going around some areas of Manhattan is very very nice so if you don't want to give up the bike, near Central Park you will be "attacked" by renters of bicycles, bargain with them to get the best price and start discovering not only the park, but also the main shopping streets and the New York suburbs.
During my stay in New York I also did a "trip out of town" to Whashigton DC in just one day. I took the bus two floors with wi-fi from the Megabus company which in 4 hours brought me to my destination at a low cost price (36 dollars round trip in the day). In less time you can also reach the city of Philadelphia. Doing everything in one day was certainly tiring but seeing the White House up close is a unique and priceless emotion.