10 dishes not to be missed in Veneto 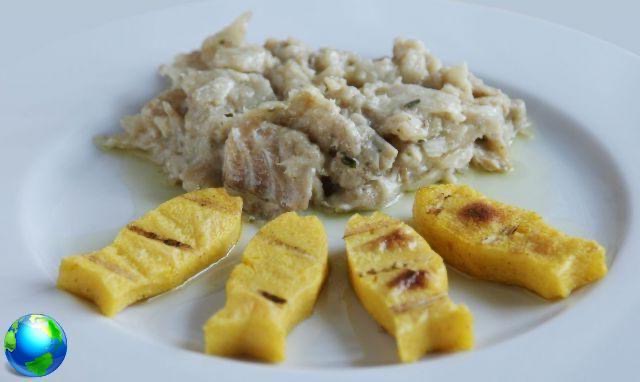 There is no Italian region that does not have its own typical dishes, with local products or not, what does it matter? as long as they have been made official and adored by the past people, but also by the contemporary one.

As regards the Veneto the tradition ranges greatly on an infinite list of specialties adapted province by province, but always referring to a mother recipe that most of the time implies an average long work and a kitchen that is proof of strong fragrances, despite the recipes being considered poor in ingredients used. There Venetian tradition it never includes bamboo steaming baskets, everyone knows that! We also exclude the sac à poche, the silicone molds, the planetary ... I know grandmothers who would be horrified at these news (obviously after asking what those words mean), and I also know a folklore that goes on with the traditional preparation and not with the new ones means, fortunately. Veneto will always remain attached to the patience of housewives - severely tested in the preparation of cod Vicentina, for example.

Spearhead of our ranking of 10 most famous dishes from Veneto, cod has always been a torture. Today, as in the past, you couldn't say "I want cod" at noon and have it ready in the evening: the cod had to (and still must) soak two days before cooking, and for the cook it wasn't all this great fun! But in the end what goodness! Obviously, as the name of the recipe says, the best place to enjoy it is Vicenza, but there are still many village festivals also in other Venetian provinces that proudly display the words “specialty cod alla vicentina” on billboards. In these cases, a generous portion of cod costs from 7 to 10 euro, not more. And it is worth it even and above all if the environment in which it is served is the shed of a festival.

In second place for fame are the "Xaéti", translated in English Zaéti or Zaletti, exquisite very yellow Venetian biscuits, because they are made with corn flour, with a grainy and very very tasty texture. There is the variant with raisins, which is the most popular, and the best places to find this authentic delight are Venice and its islands. Often, however, Zaéti are sold at indecent prices per bag (10-12 euros - and the quantity is small, insured), but you just need to have an eye and buy them even at a simple bakery (for 3-4 euros) and proceed cheerfully to the typical one-pull-the-other. You don't need a patinated pastry to decree its goodness, believe me.

In third place we find the fixed composition Poenta and oxèi, when 'poenta' stands for polenta and 'oxèi' stands for birds. Polenta and birds, then. The type of small bird is not specified in the title of the recipe since the Venetian hunters prefer those more satisfying for their taste (outside the protected categories of course): the hunting tradition is still well rooted in the countryside and on the hills, and skewers with birds and lard or bacon with a spoonful of yellow polenta next to it are still seen as a gourmet dish. It is not easy to find women brave enough to take care of the cleaning of the game, but it is by no means a rarity for a Venetian to participate in at least two dinners a year under the banner of poenta and oxèi. As for the pig, as the grandparents say, “nothing is thrown away!”, So if you happen to eat this dish with a Veneto DOP, don't be horrified if it leaves only its beak, legs, bones and toothpick out!


In fourth place the risotto alla trevigiana, in which the Treviso radicchio is used, with a bitter taste but perfectly engaging in the risotto dedicated to him. Present only for a part of the year, it constitutes the alternative to many simpler first courses such as pasta, because it is possible to obtain the vegetable at reasonable prices if bought in casseta, with formidable results (radicchio is also used in meatballs and appetizers).

Another important first for Venetian cuisine is the pasta and faxòi, that is a soup of blended beans, with a creamy consistency, with homemade pasta. Basically a bean soup with pasta. Very tasty and highly nutritious (legumes and carbohydrates in this course are often enough and are left over to make a complete meal) it is served in all rustic trattorias, unfortunately no longer in farmhouses. A real shame, because despite being the result of poor ingredients (eggs, flour, water, beans, onions, celery and carrots) the success of the recipe is always guaranteed.

In sixth place another first course, i laughed and bixi. Another soup of rice, broth and peas, widely spread since ancient times. The variations of rice and bixi have expanded throughout the north, encountering ingredients that have been added to the original, but the simplicity of the mother recipe remains the undisputed queen of winter evenings in Venetian kitchens that still have some memory ( and some bacon to add).

In seventh place another typically Venetian recipe takes over: le sardines in saòr. Recipe loved and hated (loved by fans of marinated fish and hated by fine noses) for the high concentration of onion and sardines, it is typically a seafood dish. For the recipe process, even in this case we cannot speak of ease: the sardines must be cleaned, washed, fried, sprinkled with wine and vinegar, with the addition of pine nuts and raisins, and then layered with the marinated onion in a baking dish. Sardines in saòr also have their times, but they are 'faster' than cod - they must rest in the fridge at least a day before being served. Not always offered in fish delicatessen shops, they are favored by those who have no digestive problems and have a strong palate, but those who love them love them madly. While those who hate them, are not found around when they smell the imminent consumption.

Another poor Venetian dish is the omelette with bruscàndoi. Wild hops have various denominations in these areas: in addition to 'bruscàndoi' they are also called 'brustàngoi', but if there are many ways to indicate them, the recipe is always one: a simple omelette with this wild grass collected close to the ditches in spring. It is also used a lot in risotto, and is also frozen by lovers of taste. This dish, however, is difficult to find on the local menu!

Moving on to another vegetable, and specifically the white asparagus of Bassano, we cannot fail to mention the typical òvi and spàraxi, translation eggs and asparagus, served side by side on the plate, with oil, salt, pepper and vinegar for seasoning. This is easy. A real goodness for those who are also satisfied with delicate flavors .. with a minimum expense if careful.

There could not have been a better ending than with a dessert that is typically cooked from the holidays of November 1st until the end of Carnival, no later than otherwise it is bad: fritòe are the small, round sweet pancakes, made with a mixture containing raisins, apples or whatever, dipped in boiling oil. Unmissable icing sugar before serving, they can also be filled with cream or zabaglione.

An entire ecosystem of nutritious and tasty dishes awaits every good connoisseur ready to experience the best of the (often) long Venetian process. There are many famous clubs, most of the time absolutely low cost, but if you want to try more variations, you just have to do host from real housewives tireless! Payment? Washing dishes and pots.

Audio Video 10 dishes not to be missed in Veneto
Nerja, where to eat well, a lot and at a good price at Merendero Ayo ❯